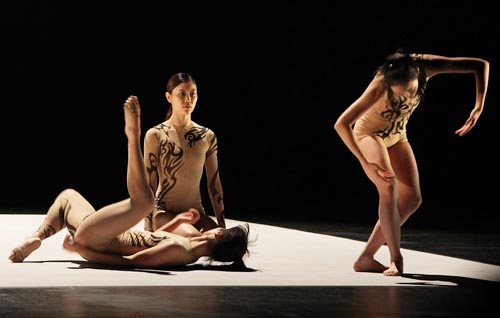 
The recently established National Modern Dance Company, founded by the Ministry of Culture, Sports and Tourism, held a ceremony to celebrate its founding last Tuesday at its main performing venue, the Arko Arts Theater in Daehangno, central Seoul. The only existing dance companies in Korea until now were the Korea National Ballet Company, which is housed at the Seoul Arts Center, and the National Dance Company of Korea at the National Theater of Korea.

For its first season, which starts in January, the company has carefully selected a repertoire of works that maintain a high level of quality with elements that can be enjoyed by a wide audience.

Planning ahead for the future development of modern Korean dance, the company has also initiated programs to mentor dancers and choreographers and foster competition among artists. Choreographers and dancers will be selected through competitive auditions for each new performance the company presents. In addition, dancers will work as apprentices or understudies before being hired as full members of the company. To help dancers perform to the best of their abilities in a stable environment, the company has created a schedule that ensures that performances are given out-of-town previews prior to their premiere in Seoul or in theaters overseas.

To ensure that modern dancers and choreographers are acknowledged for their abilities both within and outside of Korea, the company will also foster modern dance academies and interact with international dance companies.

“Although Korea has more modern dance companies than any other country, most of them are unequipped with the necessary conditions and are not able to practice freely,” said Artistic Director Hong Sung-yop, who is also the artistic director of the renowned modern dance company, Dance Theater On. “The National Modern Dance Company will undoubtedly contribute a great deal to the development of Korean modern dance.”

The company’s debut performances will be held next January at the Seoul Arts Center’s Towol Theater. The program will consist of re-creations of Hong’s representative works. Immediately following its debut, the company will embark on a regional tour to promote its inaugural season.

The company will new works by Hong in performances scheduled for June 2011.