Age is not a barrier for Japanese student

Age is not a barrier for Japanese student 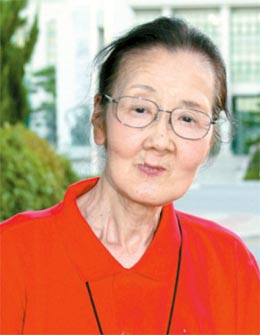 Kazuko Kumata, a 77-year-old freshman at Mejiro University, says she is enjoying her time with her classmates in the “Korean Language and Culture Education” program. By Lee Key-one

At 77, Kazuko Kumata is perhaps the oldest student in her class. She is currently a freshman at Mejiro University majoring in Korean Studies.

She recently visited Korea from Aug. 1 to 20 as a participant in the Korean Language and Culture Education program hosted by the University of Ulsan’s Office of International Affairs and Education.

Kumata said she started studying to overcome loneliness. She graduated from Taisho University in 1952, and taught at schools in Japan for the next 30 years. After her husband died, she said she started to feel lonely because the couple didn’t have any children. People suggested that she find something to do, so she decided to go back to school.

“The reason I chose Korean Studies is because Korea is the closest country to Japan,” Kumata said. “I wanted to know more about Asian history because I studied Japanese history during college.”

Kumata is still a novice at speaking Korean, but she has the will to learn.

“I haven’t studied for the last 15 years, so getting back at it was difficult,” Kumata said. “Reviewing and doing assignments force me to sleep at 1 a.m. nearly every day, and I wake up at 5 a.m. I am still struggling with the language, but I am starting to grasp literature and history.”

Once she graduates, Kumata will be 81 years old. She already has plans for the next phase in her life after school.

“After I graduate, I hope to get a license to teach Korean history,” she said. “I plan to form and teach a group of housewives who are interested in Korea.

“One example of what I will teach is etiquette. For example, Koreans help out an elderly person when they are carrying a heavy bag. If I could suggest ways to fundamentally implement manners like this in Japan, my study of Korea would be worthwhile.”