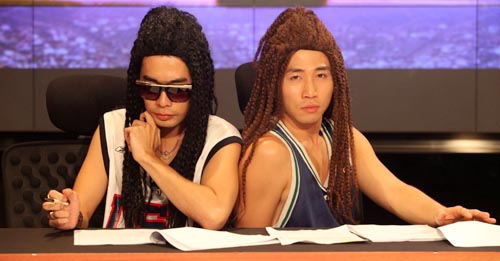 K-pop duo UV poses on the set of their reality show, ‘UV Syndrome.’ The group recently released a hit album that reflects their comedic style. By Park Ji-hye


The duo UV has unwittingly turned a new page in K-pop history by mixing their no-holds-barred style of comedy with fun and innovative music. Their album and a television show are hits, and they’ve done it all with little to no self-promotion.

Korea has had its share of comedians who have recorded albums. The infamous “Comic Carols” album by comedian-turned-film-director Shim Hyung-rae, released in 1990, is the most prominent example.

But UV is quite different. Not only was their success unintentional, but they are dead serious about their music.

UV is comprised of the well-known comedian Yoo Se-yoon and his friend Muzie, a hip-hop musician. When Yoo released the song “No Cool, I’m Sorry,” on his Cyworld page in April, it instantly went to the top of the online charts.

“I went over to Muzie’s house one day and we somehow made the song ‘No Cool, I’m Sorry,’” Yoo said. “I just uploaded it to my Cyworld page and people really loved it.”

The song, which marked UV’s debut, follows the typical theme of two lovers who go their separate ways. What is not so typical is that the lyrics include comical lines like, “I’m sorry for being clingy even though we broke up on good terms” and “I thought you’d answer me if I sent you a text using a different number,” both of which are sung in a serious tone.

“When I start humming a tune, Muzie translates it into a song,” Yoo said. “As for the lyrics, we just start saying anything we like on the mike and somehow it gets finished.”

UV’s songs were eventually released last month on the EP “Do You Want To Be Cool?” The group followed that up with the sitcom “UV Syndrome,” a reality show that depicts the group and their efforts to produce high quality music. It currently airs on the cable music channel Mnet.

The group’s music is reminiscent of Korean pop from the 1990s. The song “Probation,” from their second album, “Back To the Dance,” for example, mixes the stylings of ’90s groups such as Roo’ra, Solid and Deux.

So far the group has taken an unconventional approach to promotion - by not promoting themselves.

“We’re only doing this for the fun of it,” Yoo said. “If we were in it for the money, we would have already appeared on music ranking shows or entertainment programs as a group. But we don’t want to turn it into a job.”

This laid-back approach has been successful so far. The music video for “No Cool, I’m Sorry” was made for just 5 million won ($4,228), but brought the group 500 million won in commercial endorsements alone.

Some artists might be tempted to parlay that success into a career, but not Yoo.

“It’s good that something we started just to have fun has made some money,” Yoo said. “But we’re still not going to turn it into a job.”

The only program on which UV is willing to appear to promote their work is their show “UV Syndrome.” Through their antics, they have won over fans of both music and comedy. For one episode, they wrote music at a haunted house because they said music needs to “move the spirit.”

“UV exists but it is a fictional group,” Yoo said. “Within that fiction, however, we have a burning passion.”