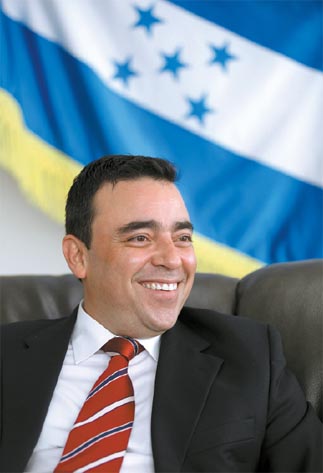 Michel Idiaquez Baradat, the new Honduran ambassador, at his country’s embassy in Seoul. By Park Jie-hye

Prior to his appointment in Korea, Baradat was stationed at the Honduran Embassy in Spain.

In a one-on-one interview with the JoongAng Ilbo on Aug. 13, Baradat, who has a black belt in taekwondo, expressed enthusiasm for his new assignment.


Q. How did you feel when you arrived to Korea?

A. The moment I got off the 24-hour plane ride, I felt completely refreshed. It was a momentous event in my life. Although this is my first time in Korea, I am familiar with Korean culture thanks to my in-laws. I took taekwondo from Song Bong-kyung - who is now my father-in-law - from when I was 10, and I learned to appreciate the beauty of Korean culture through my mother-in-law, Kang Young-shin, who set up a Korean school in Honduras. President Porfirio Lobo Sosa also attended classes at the same taekwondo school for a long time. So even before he became president, we had become close through taekwondo. Through the influence of my father, who was a diplomat, I learned English, French and Spanish, but I also want to be fluent in Korean.

The retraction of Kang’s appointment was an issue, then you were appointed.

President Lobo had appointed my mother-in-law to bring Korea-Honduras relations to great heights. But after the appointment, they found out that an old article in the constitution prohibits foreign-born naturalized citizens from becoming overseas envoys. The government had no choice but to withdraw the appointment. She received other offers but she declined them as a service to Korea. Then, President Lobo decided to appoint me.

I have been working as a career diplomat since 1992. My mother-in-law can also advise me. She will arrive here in October.

There is a rumor that Kang tried to re-apply for Korean citizenship during that time. Is it true?

It is not true. She never went through the application process. She takes pride in the fact that she is a Honduran citizen, and Hondurans love her, too.

How did you meet your wife Song Yi-baek?

She was just a baby when I started taking taekwondo classes with my father-in-law and we were friends for a long time. Then in 2002, I ran into her at a fitness center in San Pedro Sula when I was working at a bank and she was a fourth year dental school student. After two years, we got married and we now have a 4-year-old and a 2-month-old son.

What are your goals as the Honduran ambassador?

Honduras has high hopes of further strengthening ties with Korea and with Asia as a whole. The goal is to learn from Korea’s example and develop Honduras into one of the world’s top 15 economic powers. We have plans to increase Korean agricultural exports and encourage investment in Honduras as well as spurring cultural exchange. President Lobo is also planning a visit to Korea next year.