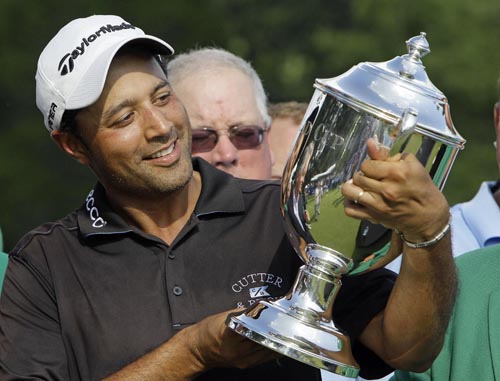 GREENSBORO, North Carolina - Arjun Atwal became the first Indian and just the sixth Asian-born player to win on the PGA Tour when he secured a one-stroke victory at the Wyndham Championship on Sunday.

The 37-year-old, who now lives in Florida, sank a pressure-packed seven-foot par putt at the final hole to edge American David Toms at Sedgefield. His final round of 67 left him on 20-under 260, ignited by an opening day 61. Toms closed with a 64.

“It was a long-time dream of mine to win out here but until it happens you keep doubting yourself and, believe me, I had my doubts teeing up today, even with a three-shot lead,” Atwal, who took up golf at the age of 14 in Calcutta, told reporters.

Atwal, who did not even have exempt status on tour, only got into this event via a qualifier for four spots last Monday.

He became the first Monday qualifier to win on tour since 1986 and his rewards include $918,000, a two-year tour exemption and an invitation to next year’s Masters, a tournament he has never played.