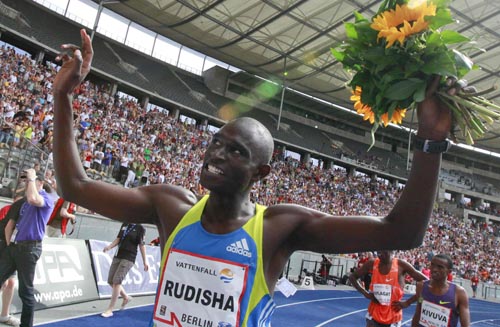 BERLIN - Kenyan David Rudisha broke the men’s 800 meters world record that had stood for 13 years on Sunday, clocking a time of one minute 41.09 seconds at the ISTAF athletics meeting in the German capital.

Rudisha snatched the world record from Denmark’s Wilson Kipketer, who set a mark of 1.41.11 in 1997 in Cologne, Germany.

“This was my first real attempt to break the world record. I knew I was good, I had trained very hard,” Rudisha told reporters. “Now that I have run that time, I can say I have the ability to improve and go faster.”

The 21-year-old Kenyan retained the African Championships title over the distance last month in the fastest time ever run in his athletics-mad country, proving he was a force to be reckoned with this season.

He is the son of Daniel Rudisha, a member of the 4x400m Olympics silver-winning relay team in Mexico City in 1968.