Allowing the dead to rest in peace

Allowing the dead to rest in peace 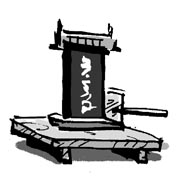 But just as his novel hit bookstore shelves in 1993, Kim found himself involved in a libel case. The lawsuit accused him of defaming Lee Hwi-so, an internationally-acclaimed physicist who was killed in a traffic accident in the United States in 1977. The novel’s main character, Lee Yong-hu, was apparently modeled after Lee, and the story highlights the conspiracy theories surrounding the death of the scientist, who led nuclear research efforts here in the 1970s.

Lee’s family filed for an injunction banning the publication and sale of the novel, arguing that the author defamed the scientist with faulty descriptions and inaccurate depictions of his personal relationships. Kim described his fictional character as a bespectacled man who is “so skinny he looks just like an anchovy.” The author also detailed an inappropriate relationship between the main character and a woman.

But the court ruled that the author did not write the book intending to defame Lee’s honor.

Defamation against the deceased is based on the legal philosophy that someone who has died has some of the same rights as a living person. Article 308 of the country’s criminal law states that defamation against the deceased is present when a living person “publicly presents false information” about the person who died. The law, according to legal professionals, essentially says that people should not have to live in fear that their reputations will be damaged after death based on speculation and guesswork.

One author who wrote that famous Korean independence activist Yu Gwan-sun was a “female hoodlum” was found guilty of defamation against the deceased.

But when it comes to the arts and fiction, freedom of expression is widely recognized and supported here in Korea. In April, the Supreme Court acquitted a producer and writer of the show “Seoul 1945” of charges of defamation against the deceased. The epic drama series, which aired on KBS, described former President Syngman Rhee and former Prime Minister Jang Taek-sang as Japanese collaborators. However, the Supreme Court ruled that the creators of the show did not intend to defame politicians.

The issue has cropped up once again in a case tied to the late former President Roh Moo-hyun. His bereaved family has filed a lawsuit against National Police Agency Commissioner-designate Cho Hyun-oh for “openly insulting the former president and bringing disgrace to his name upon his death.”