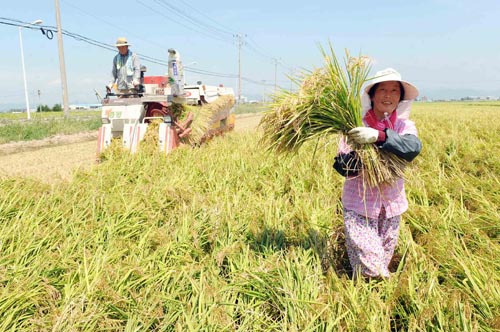 
South Korea's government and ruling party are discussing resuming food aid to North Korea - which was halted due to deteriorating inter-Korean relations - to improve relations with Pyongyang and control a rising rice surplus, lawmakers said yesterday.

In a meeting with senior government officials on Sunday, Ahn Sang-soo, chairman of the ruling Grand National Party, raised the issue of rice shipments to Pyongyang, citing the North's worsening food crisis in the wake of recent flooding, according to GNP spokesman Ahn Hyoung-hwan.

The GNP chairman also said that a donation to North Korea would help Seoul use up rice and cut the nation's stockpile, particularly ahead of the government's upcoming annual rice purchase.

South Korea previously sent 300,000 to 400,000 tons of rice to its neighbor annually, but has not sent any since President Lee Myung-bak took office in early 2008.

“The aid to North Korea should be reviewed multilaterally in terms of humanitarian perspectives as well as international relations,” the spokesman said.

The Ministry of Unification, which handles North Korean affairs, denied any plan to resume rice aid.

“The government's position on aid to North Korea has not changed,” ministry spokesman Chun Hae-sung said in a briefing. “There are no plans currently to review the matter of rice aid.”

Yoo Jeong-bok, a GNP lawmaker tapped to head the Ministry of Food, Agriculture, Forestry and Fisheries, backed Ahn, saying in a confirmation hearing that rice aid should be considered.

“It is worth reviewing, not just for the purpose of taking care of the domestic rice surplus, but also from the perspectives of humanitarianism and inter-Korean reconciliation and cooperation,” he said.

Inter-Korean relations worsened last year when the North conducted long-range missile and nuclear tests. Tensions have risen further since the South Korean warship Cheonan sank in March from what investigators said was a North Korean torpedo attack that killed 46 sailors.

Earlier this month, a group of five South Koreans crossed the heavily armed border into North Korea to deliver 400 million won ($340,000) worth of anti-malaria aid despite hostility between the divided states.

The crossing marked the first South Korean civilian visit since Seoul banned trips to North Korea three months ago to protest the sinking of the Cheonan.