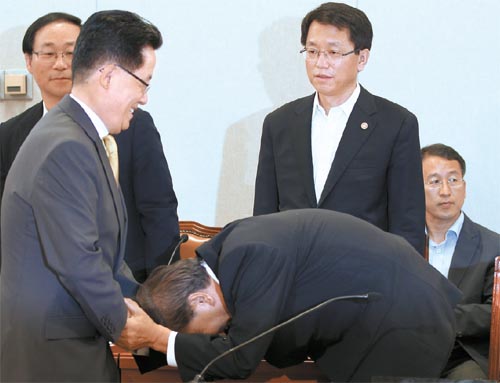 
Four ministers-designate were questioned yesterday during confirmation hearings at the National Assembly following the Aug. 8 cabinet reshuffle, and lawmakers focused on Lee Jae-oh, the person expected to wield the most power of all the nominees.

Lee, who has been nominated by President Lee Myung-bak to be minister without portfolio, was asked about his relationship with Nam Sang-tae, the CEO of Daewoo Shipbuilding and Marine Engineering.

“I do not know the man very well,” said Lee, who is known to be a close adviser of the president.

Lee has been accused of helping Nam get reappointed CEO in early 2009 in exchange for getting a job for one of his acquaintances at the company.

Lee said he could not have had any influence over Nam’s reappointment because he was in the United States during that period. “I don’t understand the suspicions surrounding Nam and myself,” Lee said yesterday.

Nam was also called to testify at the hearing but left for a business trip abroad last Friday.

Lee was also questioned about a bribery case in 2007 in which nine pro-Lee Myung-bak lawmakers received illegal campaign funds. Lee denied having any involvement.

“Many people feel that [I am responsible for the divide between the pro-Lee and pro-Park factions],” Lee said. “But do you think I am really the reason?”

“Any conflict between myself and Park Geun-hye should be resolved,” he said. Lee also said he has not thought of running for president himself.

The minister-designate said he feels uncomfortable being called the “heavyweight minister.” The nickname stuck after the early August reshuffle because many expect Lee to be the power behind the president as the presidential elections approach.

Lee said he is open to taking on a special role for inter-Korea affairs.

Lee also said that he did not fabricate his academic records. Lawmakers had accused him of lying about graduating from Kookmin University. Lee explained that he graduated from JungAng Nongmin School, which was later merged with Kookmin.

In other hearings yesterday, Lee Ju-ho, nominee for education minister, was questioned on duplicating a passage from a 2001 thesis in another research report he wrote in 2002. Lee explained that the Korea Development Institute, where he worked as a professor before entering politics, allowed such double publication.

Former spokesperson for Lee’s 2007 presidential campaign Chin Soo-hee, who is the welfare minister nominee, had to answer for her daughter. Lawmakers said she “took advantage of the Korean health insurance seven times after she gave up Korean citizenship in 2003.” Chin acknowledged her daughter’s wrongdoing and pledged to learn from the incident.