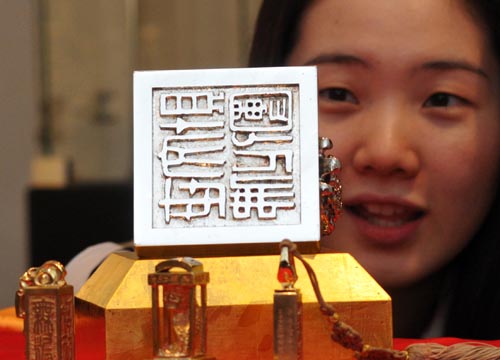 A national seal advertised as being made with platinum and diamonds at an exhibition at the Lotte Department Store last year. [JoongAng Ilbo]


The creator of the great seal of Korea, a phoenix-shaped chop the president uses to approve important state matters, in on the lam.

Last week, Min Hong-gyu, chief of the government’s great seal management team, was accused of pocketing 900 grams of gold left over from the seal made in 2007 or using it to make miniature seals for politician friends of then-President Roh Moo-Hyun.

This week, he’s accused of faking his resume and palming off another seal at the Lotte Department Store as a precious specimen made from platinum and diamonds, when it was actually made of brass and artificial gems. The Seoul police put the 56-year-old Min on a flight blacklist yesterday in fear he will flee the country. The Ministry of Public Administration and Security requested the police to investigate Min for fraud and embezzlement.

According to Lotte, the country’s largest department store chain, Min proposed that it hold a special sale event for reproductions of the great seal. Lotte did so in its main branch in Sogong-dong, central Seoul, from Jan. 2-18. Min was in charge of supplying the products, the store said.

At the event, the store put several seal products up for sale that it described as a “Super Limited Edition.” It said they were made by the great seal artisans (who work for the Ministry of Public Administration and Security) and modeled after the one-and-only great seal, used by the president for national merit awards or changes to the Constitution.

A “diamond phoenix great seal” grabbed the most attention, store officials said, because of its rarity and price. The seal was priced at 4 billion won ($3.4 million) and was described as being made of platinum and diamonds.

Some members of the seal management team said the “diamond seal” was made by artisan Lee Chang-su, one of the team’s members, but imitation diamonds were used, and the base was bronze, not platinum. Its value, they said, was around 2 million won.

Lee told reporters he made the diamond seal at the request of Min, but did not know what Min would use it for.

The store officials said the diamond seal was unsold and was taken by Min after the sale, but some reports have said it was sold to a Japanese businessman, kept in a vault of a local bank or is in Min’s possession.

Min’s credentials are also being debated.

Min claimed that he learned seal manufacturing from Jeong Gi-ho (1899-1989), who made the first great seal for the country. (The 2007 seal is the fourth in its line.) Min became chief state-seal manager in 2007. But Jeong Min-jo, 67, son of Jeong Gi-ho, told the Yonhap News Agency yesterday his father never taught Min. Jeong claimed Min held several exhibitions of seals he claimed to have made but were imported or made by other people.