Seok to be on national team

Seok to be on national team 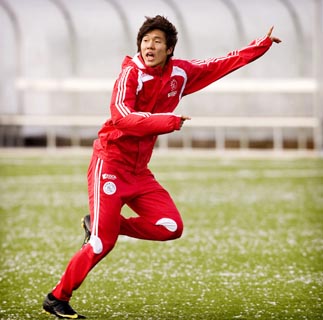 Continuing the trend of infusing young talent into the national football team to build for the 2014 World Cup, manager Cho Kwang-rae selected Seok Hyun-jun of Ajax for the international friendly against Iran on Sept. 7.

Cho has decided on 14 overseas-based players to make up the core of the national football team for the friendly against Iran. Aside from recognizable names such as Park Ji-sung, Lee Chung-yong, Park Chu-young and Cha Du-ri, Seok stands out because he is a first-time selection to the national team.

The Korea Football Association announced yesterday that it had sent requests to the respective professional clubs of 14 players to allow them to participate in the game, which is set to take place at the Seoul World Cup Stadium.

The 19-year-old forward is the only first-time selection on the list, and if all goes as planned, will make his national team debut on Sept. 7. Cho - who is known to have a keen eye for discovering young prospects - selected several promising players to the national team for his managerial debut match against Nigeria in Suwon on Aug. 11. Yoon Bitgaram, Ji Dong-won, Kim Young-gwon, Cho Young-cheol and Hong Jung-ho, all between the ages of 20 and 21, made their national team debut in the Nigeria match. Yoon scored a goal in the 2-1 over the Super Eagles.

Seok is expected to have an immediate effect on the Taegeuk Warriors as well. Listed at 190 centimeters (6 feet 2 inches) and 83 kilograms (183 pounds), Seok boasts impressive size for a Korean forward.

“He has the poise of a veteran who has played more than 150 games at the professional level,” said Olympic team manager Hong Myung-bo, who previously managed Seok on the Olympic squad.

Seok signed with the Dutch club in January and posted eight goals and two assists for Ajax’s youth team. He continued to produce this preseason, scoring five goals and adding an assist over four games, earning a spot on the first team.

Another talented young forward whose national team debut has been delayed is Sohn Heung-min of Hamburg SV. The 18-year-old had a superb preseason by notching eight goals in eight games but is recuperating from surgery to repair a broken metatarsal bone in his left foot. In the friendly game against English club Chelsea on Aug. 4, Son was substituted into the game in the 82nd minute to replace Dutch forward Ruud van Nistelrooy, scoring the winning goal in the 2-1 win but only to break his left foot merely minutes afterward. Son is expected to be sidelined for two months.

Cho is expected to give Sohn a shot in the international friendly against Japan on Oct. 12. It will be the final friendly match for Cho and his men prior to the 2011 Asian Cup to be held in January in Qatar.

On a side note, Cha Du-ri of Celtic FC is expected to compete for the starting right fullback spot with Choi Hyo-jin of Seoul FC. Choi made his return to the national team after a year in the Aug. 11 match against Nigeria in Suwon. Choi scored a goal in the game and was complimented on his active play.