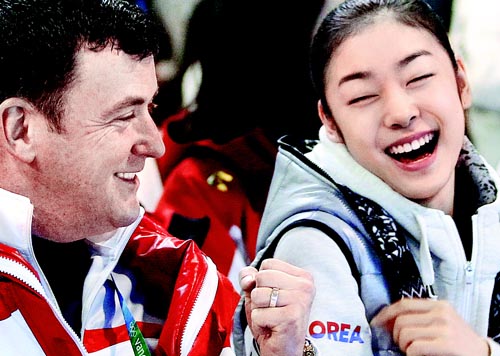 
Korean Olympic figure skating gold medalist Kim Yu-na has parted ways with her coach Brian Orser, their agencies announced yesterday, with each giving different accounts on events that led up to the move.

According to AT Sports, Kim’s Seoul-based management company, Orser said Monday that he would no longer coach Kim and that the agency accepted his decision.

“Ever since Orser was offered a job to coach another skater in May, we’ve had an awkward relationship,” the agency said in a statement. “Since June, Kim Yu-na has essentially been training alone.”

The statement was referring to rumors that first spread in April that Orser was about to become the coach for Japanese skater Mao Asada, Kim’s main rival. Orser later admitted he did receive the offer but said he remained devoted to Kim.

At the time, Kim was reportedly considering turning pro and giving up competitive skating, which only fueled speculation that Orser could jump ship.

Asada was the runner-up to Kim at the 2010 Vancouver Winter Olympics, but beat the South Korean at the 2008 and 2010 world championships.

In a telephone interview with Yonhap News Agency, Orser refuted AT Sports’ claim and said he was “surprised” when the Korean agency told him three weeks ago that he would no longer be Kim’s coach. He also denied that coaching another skater has to do with him leaving.

Earlier Tuesday, IMG, the agency for Orser, said in a release that Kim’s mother, Park Mee-hee, and AT Sports informed Orser on Aug. 2 that “he would no longer be retained to coach Kim.”