Track and field suffers from lack of appreciation

Track and field suffers from lack of appreciation 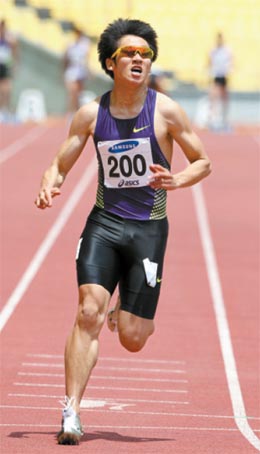 Kim Gook-young broke the 31-year-old Korean record in the 100-meter sprint event at the National Athletics Championships in Daegu on June 7. [YONHAP]

Jamaican track coach Leo Brown flew halfway across the globe with hopes of improving the Korean national track team. That was in May last year, and in less than seven months, he returned to his home country full of dismay.

The negative remark was made as Korea is gearing up to host the 2011 IAAF World Championships in Daegu next year with hopes of improving its track and field program. However, athletes like Kim Gook-young, the current Korean 100-meter record holder say it is unlikely.

“Compared to world class athletes, [our] runners are far below the global norm,” said Kim in an e-mail interview from the United States, where he is currently training. “It is unlikely that we can get a medal or even reach the finals for years to come.”

Korea has long dominated several sports such as archery and short-track speed skating, and it recently began to show its strength in figure skating and swimming, as was shown with the success of Kim Yu-na and Park Tae-hwan. Track and field, however, has slim hopes of being the subject of “Korean magic” for the time being, insiders say. The sport is facing serious stagnation in Korea.

Kim broke a 31-year-old Korean 100-meter sprint record with a time of 10.23 seconds at the National Athletics Championships in Daegu on June 7. The record of 10.34 seconds, set by Seo Mal-ku at the 1979 Summer Universiade in Mexico City, had been left unscathed for more than three decades before Kim burst onto the scene. But the 200 and 400-meter relay records, as well as other records, have been in place for more than two decades.

Track experts point to a bleak future for the athletes involved in the sport and public indifference is the primary contributing factors in the stunted growth of Korean athletics.

An Jeong-hun, dean of college education at Sungkyul University and an executive director of Korea Athletics Association of Federation, said: “Since there are limited spots for coaches, most track athletes have a hard time getting jobs after retirement. Some of them cannot even afford the basic necessities of life.”

Talented track athletes are likely to succumb to temptations from other popular sports, such as football and baseball.

“I observed many promising track athletes shifting to other sports,” said Kang Tae-suk, a former national sprinter and current head coach of the Anyang City Hall track team. “Anyang hosts annual track meets in March and September, and numerous football and basketball coaches attend this meet in order to scout talented athletes. They offer better conditions and a more attractive future, so lots of prospective runners quit track and move on to more popular, well-paid sports.”

Lack of public interest is another factor that causes young runners to avoid track. The public rarely pays attention to Korean track athletes and their performances.

“The Korean media tends to focus on a limited number of sports,” An said. “In Korea, the press focuses only on daily baseball games and football games. No one pays attention to track, and our track athletes finish their meets under complete indifference.”

Although the current status of Korean track is dismal, there is still hope.

“There are young, talented athletes who can achieve world-class records in the future,” Kang said. “By gaining experience at the 2011 World Championships in Daegu and 2014 Asian Games in Incheon, Korean track will definitely grow.”

In order for such development to take place, a long-term investment and attention to track are necessary.