A decaying past, a hopeful future

A decaying past, a hopeful future 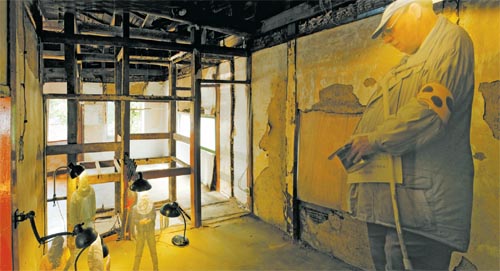 “The Protesters and the Blind,” a joint work by the husband-and-wife duo Choi Seung-hoon and Park Sun-min. Provided by Boan Inn


A tiny, rundown inn stands a short walk from the bustle of the city center in northern Seoul, just remote enough that it’s easy to pass by.

The sign at the front - a square, white board with the words, “Boanyeogwan,” or “Boan Inn,” in blue letters in an outdated, vintage font - foreshadows the poor state of the interior. The two-floor space is supported only by fragile, wooden poles. The walls have been stripped of wallpaper and the windows are broken.

With a closer look, something seems off about this abandoned-looking inn. All of its 10 rooms are painted in stark white and the sound of water dripping echoes in the background. On the second floor, there is a small statue of a white horse with a leg missing. Nonetheless, the horse stands erect, as if it had four sturdy legs. On the walls, random anecdotes from novels are written, as if someone was trying to leave clues behind.

Is this the set of a new “CSI” episode? Or perhaps a scene from a Park Chan-wook film, right before the psycho killer slashes someone’s head off, splashing gory red all over the white walls? Neither.

Though not as action-packed, the inn does have a twist. It’s actually an art gallery, currently the site of a new exhibition titled “Blindness,” based on the themes of the novel of the same name by Jose Saramago. Eleven artists have chosen a room in this “gallery” to showcase artwork related to the theme of sight and offer their own interpretations of the meaning of vision.

“This exhibition wouldn’t have worked in a regular white cube gallery,” said Bae Se-eun, director and main curator. “Sight itself, and how one interprets what one sees, is entangled in how we interpret the world and the people around us. In this sense, the works get a second life being presented in this kind of space, where people actually lived, congregated and slept.” 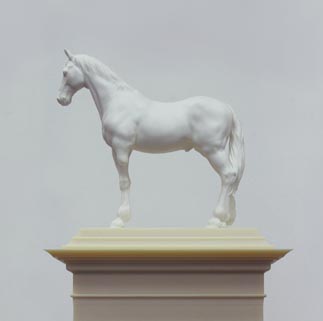 “Esquisse over the Autonomy,” by Choi Su-ang. Provided by Boan Inn

The Boan Inn - which has around 80 years of history behind it - was turned into an art gallery two years ago. Former guests at the inn - which is located near the Blue House and Gyeongbok Palace - include dignitaries during the Joseon era as well as some of Korea’s most celebrated poets including Lee Sang and Suh Jeong-ju, among others, the organizers said.

“The inn presents us with lyrical layers, being open to the public but at the same time serving as a very private and secretive place when you think of individual rooms,” said Paek Nam-ju, the director of the Boan Inn gallery.

Near the entrance, there is a small room with what seems like a white brick floor. The “bricks,” it turns out, are actually soap, and this room is the setting for a film by Kim Jinran of a person trying to mop the floor. The work runs on a TV in the room. Titled “Exercise in Futility,” it is Kim’s symbolic take on life’s Sisyphean qualities, with the room representing the bridle of the daily grind. However, the excerpt written on the wall next to the room tells of another aspect.

The excerpt is the central character’s monologue towards the end of “Blindness,” as she stands in the rain. After she witnesses the collapse of society following a strange epidemic of blindness that spread in her city, a community is formed by the affected people that begins to restore peace. The rain here serves as a metaphor for washing away pain, and as a symbol of hope for the characters. As with the rain, Kim’s soap-mopping room, when seen in context with the novel excerpt, provokes more positive feelings, perhaps even optimism.

“The 10 artworks featured are meant to be interpreted in both a literary and visual context,” Bae said. “We wanted to show a different way for people to view contemporary art, in which they can play around with the connection between visual and literary forms.”

In a room on the second floor of the inn, three objects are placed together. They have one thing in common. A three-legged white horse sculpture stands next to a table with one leg sawed off, which is near a prosthetic leg filled with water, transformed into an aquarium for a fish.

“I wanted to tell a story about deficiency. What society thinks of as deficient might not be so at all,” wrote Choi Su-ang, of his tentatively titled work “Esquisse over the autonomy.”

“We tend to forget these days that what is visible might not be the whole truth,” Bae said. “With this exhibition, we wanted to have the room to verbalize the tangible, and through this process, make an object or an idea new again.”