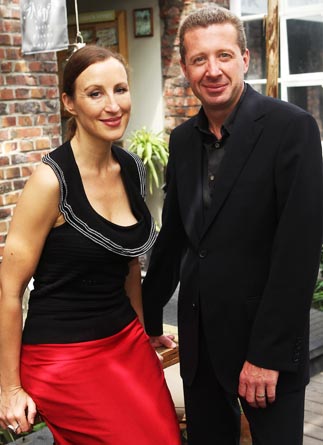 When his Korean friend played a CD of a traditional Korean pansori master for him in Sydney, it was meant as a joke. But for Simon Barker, a young, pensive Australian jazz drummer thirsty for a new kind of music, the man on the CD’s energy and emotional resonance changed everything.

Barker set out in search of the master, Kim Seok-chul, whose repertoire was found to be preserved in Korea as Intangible Cultural Asset No. 82 but was barely known to the general public. The Australian made 17 trips to Korea over seven years to find him, and along the way befriended a variety of pansori musicians and shamans preserving their forgotten arts. It was a strenuous, heartfelt process that was captured in the documentary “Intangible Asset No. 82,” set for release in Korea on Sept. 2 and later across Asia and North America.

“For me it was like hearing a whole new sound of music that I’d never heard before,” Barker said after a press screening in Seoul Thursday night. “So it was a very special, transformative moment when everything I thought about music had changed for me.”

The film, titled in Korean “Thank You, Master Kim,” was directed and produced by Emma Franz, a musician-turned-filmmaker also from Australia. It follows Barker’s epic journey to find master Kim and includes encounters with other Korean artists he met on the road. Kim Dong-won, a performance art professor at Wonkwang University in Iksan, North Jeolla, and a member of Yo-Yo Ma’s Silk Road Ensemble, served as Barker’s guide to remote mountains and temples where pansori singers and shamans practice.

One of the musicians they encountered was Bae Il-dong, who lived and trained next to a waterfall on Mount Jiri for seven years to strengthen his voice. They teamed up to form Daorum, a six-member hybrid band of pansori and jazz, whose next concert is set for next Monday at Gwanghwamun Art Hall in downtown Seoul.

There is also the story of a bright-faced young woman who said God’s revelation came to her unexpectedly and told her to become a shaman, and that she was only able to regain peace once she obeyed.

Along with these episodes, the film captures hidden scenes of Korea’s countryside, from waves of mystic blue mountains, to clouds rolling in and an old man trying to knock persimmons off a tree with a rod.

“I grew up admiring, studying and learning the music of American jazz musicians,” Barker said. “But music was changing dramatically in the last 20 years and the musical vocabulary I had didn’t allow me to play this new kind of music. So the way Kim Seok-chul’s music is put together on a very micro level solved many musical problems of contemporary music.”

As the journey nears its end, Barker learns that the 84-year-old Kim is hospitalized. Born into a poor shaman family on the east coast of Korea in 1922, when Korea was under Japanese colonial rule, his mother died when he was just five and poverty compelled him to join a shaman troupe. Running errands for adults, he learned to sing pansori over their shoulders and was accepted as a performer at nine. His pansori repertoire from the east coast, meant to pray for peace and harvest and to console the dead, was designated as Korea’s intangible asset No. 82.

One day, Barker learns that Kim is about to hold a shaman ritual, believing his illness has to do with his dead sister’s spirit. In the film, the master, clad in white traditional clothes and seated with a bent back, appears deeply fatigued and shrunken as a young female shaman loudly calls the spirit and percussion music fills the air.

But when asked by Barker to play the janggu - an hourglass-shaped traditional Korean drum - and sing along, Kim’s eyes sparkle and a mysterious energy emerges from his withered body. He smiles and tells the young man, “Thank you.”

“He’s someone I admired so many years - 10 years,” Barker said. “And it still shocks me that someone so close to the end of their life gave a stranger so much of their time, to someone they’ve never met.”

“I worked in many countries and felt and experienced how music really connected me with people that I had no cultural connection or often no language in common,” Franz said. “So I wanted my first film to be about that, but not about me.”