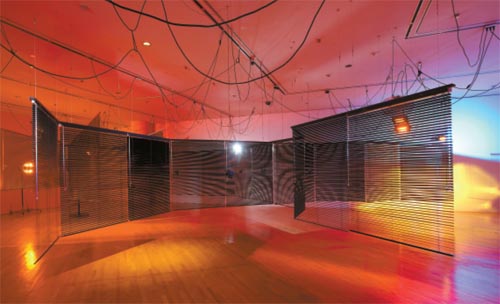 Visitors to the third floor of Artsonje Center, a contemporary art museum in central Seoul, might feel as if they have entered some kind of abstract, artificial forest.

There are big venetian blinds hanging from the ceiling, which filter the ever-changing colors of moving spotlights mounted on the wall, and winds from electric fans circulate throughout the room. The blinds throw dizzying combinations of light and shadows and the winds sound just like trees in a dense forest. Between the blinds are square mirrors that reflect spotlights and viewers, creating an odd sensation.

This multisensory piece is “Series of Vulnerable Arrangements - Shadowless Voice Over Three,” by Haegue Yang, an artist who has lived and worked in Berlin and Seoul. She became well-known to the public after her solo exhibition was presented at the Korean Pavilion of the Venice Biennale in 2009. This is her first solo exhibition in Korea and features more than 10 works ranging from photography to sculpture.

“Voice Over Three explores the sense of ‘community’ that develops when its members become a minimal yet dynamic constellation of three: subject, other and another,” Artsonje said in a statement about the work. “Here, the ‘voice’ works as a medium which connects speaker and listener more directly than any other method of communication, though interpretations may vary depending on modes of conveyance.”

But how is the installation related to the voice? 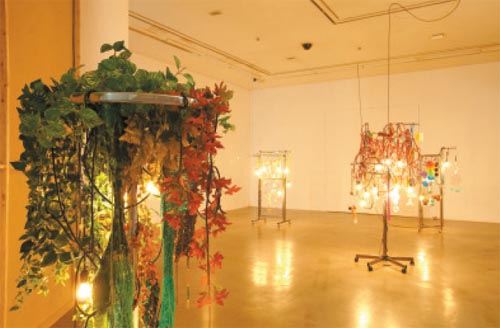 The installation “ Shadowless Voice over Three,” top, and the light sculptures “Seoul Guts,” above, are part of the “Haegue Yang: Voice Over Three” exhibition at Artsonje Center, central Seoul. by Kim Sang-tae. Provided by the gallery


When viewers speak into an open microphone installed in a corner of the exhibition space, the movement and colors of the spotlights, whose movements are programmed, become distorted.

Yang’s work promotes “a confrontational yet boldly intimate relationship between the viewers’ voice and the artist’s choreography of lights,” the statement said.

“It is also a work that reflects my interest in representing the senses that are difficult to describe,” Yang, told reporters at a press conference last week. “So it is related to works by Marguerite Duras, who was also interested in this kind of work.”

Some of the works here are highly conceptual and difficult to understand, but the exhibit also contains lighter works with touches of humor.

One such work, titled “Seoul Guts,” consists of six light sculpture. It shows six Seoulites with everyday objects Yang has found in the traditional markets of Seoul and other places. Among them, the “Street Peddler” is an assembly of various health -related objects ranging from ginseng to massage tools, showing how obsessed citizens have become with their health.