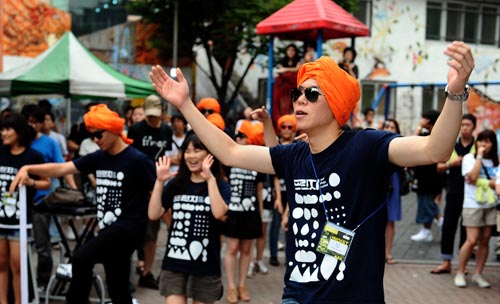 Independent artists perform at the playground near Hongik University in western Seoul as part of the Seoul Fringe Festival, which runs through Saturday. The festival features theater, dance, mime, performance art and music at venues in and around the university. See FESTIVALS, below. [NEWSIS]

Friday to Saturday: Virtuoso cellist and emerging conductor Han-na Chang will lead the Absolute Classic Festival Orchestra in Schubert’s Symphony No. 5 in B-flat major D. 485 and Brahms’ Symphony No. 1 in C minor, Op. 68, on Saturday. The repertoire for Friday has not yet been confirmed.

Friday to Sunday: The inaugural year of what is to become an annual festival features jazz, French chanson, Brazilian bossa nova, tango from Argentina as well as traditional Korean music including pansori. The majority of concerts will be free, except for the four concerts to be held at Bitgoeul Hall on Friday and Saturday.

Tickets cost 20,000 won for those who reserve in advance over the Internet at ticket.auction.co.kr or 30, 000 won at the door.

From Seoul, take the KTX from Yongsan Station to Gwangju and go to Geumnamro 4-ga Station, line No. 1, exit 2.

EXHIBITION OF SOUND WITH ERDOS HAN

Sept. 17: The Seoul Metropolitan Traditional Music Orchestra is expanding its scope in this concert featuring music and painting. The performance was organized in conjunction with Erdos Han, a western painter.

Until Aug. 31: This horror-inducing play follows a newlywed couple that moves into a house that was previously owned by one of the husband’s friends. Upon moving in, the couple starts to hear strange sounds. When the wife slowly starts to go insane, the husband urges her to go see a therapist but she refuses. The play follows the wife’s transformation and ultimately reveals why she has become this way.

Until Sept. 19: This melodrama features popular actresses Gum Bo-ra and So Yu-jin in an emotional mother-daughter story. The mother, played by Gum, constantly discourages her daughter - played by So - who wants to be a novelist. Despite this negativity, the daughter continues to pursue her dream.

Until Oct. 10: The Korean production of “Closer,” the award-winning play by English playwright Patrick Marber, stars popular film and television actress Moon Geun-yeong and actor Um Gi-joon. The play, which was also made into a film, focuses on the complicated relationship between two couples and their betrayal.

THE KING IS THE KING

Sept. 3 to 19: This is the second in the World Contemporary Play Series following “Darwin’s Tortoise” in 2009 and the first Arabic play introduced in Korea. It is told in the tradition of the One Thousand and One Nights collection of folk tales, and is a fable about power and desire.

Sept. 8 to 12: Nuevo Ballet Espanol with Rojas and Rodriguez will perform in Korea for the first time. The 90-minute performance is accompanied by a live band featuring guitar, violin, cello, percussion and two singers.

Sept. 7 to 16: This musical premiered in 2009 and with a series of performances since then. Various forms of Korean traditional music, including minyo and jeongga - which mostly developed around the Seoul Metropolitan and Gyeonggi area - will be recreated, along with the religious and royal culture of Korea.

To Saturday: The Seoul Fringe Festival is a showcase for independent artists working in theater, dance, music and performance art.

Performances will take place in various venues near Hongik University in western Seoul, including small theaters, live clubs, galleries, on the street and around the subway station.

Saturday to Sept. 5: The games, inaugurated by the Korean city of Chuncheon, feature 15 international and local leisure events with 15,000 athletes from 52 countries.

World-class athletes are expected to participate in the event, the organizers said.

The event also includes a B-boy championship that is expected to draw hundreds of young hip-hop artists and breakdancers to the city. There are also water ski shows, inline slalom shows and paragliding and aerobatic demonstrations, organizers said.

From Seoul, take the KTX from Yongsan Station to Chuncheon.

Sept. 1 to Oct. 30: The fourth edition of this annual festival presents 34 pieces of contemporary theater, dance and music from various countries, including “Krapp’s Last Tape” written by Samuel Beckett and starring avant-garde director and playwright Robert Wilson, who will both direct and act in the one-man show. Other performances include a modern version of “Othello” by the Comedy Theater of Budapest (Vigszinhaz Comedy), the Slovakian “Tango” by director Rastislav Ballek, and “Boshobari,” “Kawakami” and “Kusbira” - a Japanese traditional comedy trilogy in the kyogen tradition. Also at the event will be “Grand Egypt and Aida” by the Cairo Symphony Orchestra, “Giant in the Sun” by a Nigerian company and more.

Sept. 3 to Nov. 7: The biannual contemporary art show in the southwestern metropolitan city features photographic, installation and media art works by about 120 artists from 31 countries. This year’s theme is “10,000 Lives,” or “Maninbo” in Korean, and is inspired by and named after the epic poem by renowned poet Ko Un. The show focuses on the relationship between humans and images.

From Seoul, take a flight to Gwangju Airport or take a KTX train to Gwangju Station.

Sept. 7 to Nov. 17: This showcase is focused on new media art. The 45 participating groups of artists from 21 countries include famous names like the British-American artist Sarah Morris and the Thai film director Apichatpong Weerasethakul, who won the Palme d’Or at this year’s Cannes International Film Festival. Among the Korean artists involved are Cho Duck-hyun, Lim Min-ouk and Noh Sun-tag. This year’s theme is “Trust.” The artworks in the show will tell or ask what trust is, as the expansion of media brings about a distortion of information and the blurring of messages, organizers say.