The right to remain silent

The right to remain silent 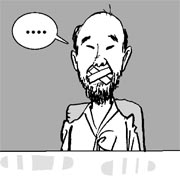 During the Joseon Dynasty, local magistrates were responsible for the courts. When a criminal - “the accused” in modern terms - was brought in to court, the first thing the magistrate did was to yell at him, saying, “You should know what your own sin is.” When the suspect denied committing any wrongdoing, the magistrate would order the suspect be flogged until he told the truth, regardless of the existence of evidence to the contrary.

In “The Story of Chunhyang,” there is a scene in which Magistrate Byeon threatens Chunhyang, who refuses to sleep with him. He roars, “You should know what your own sin is,” employing the same tactic used to force a confession from a criminal suspect.

For the magistrate - who played the roles of administrator, prosecutor and judge at the same time - and other local government officials, garnering a confession was the most useful tool for both investigations and trials. Therefore, the criminal proceedings of the Joseon Dynasty were known as “confession-based trials.” It was similar to a voluntary confession, which is accepted as evidence in Western courts. However, there is a slight difference.

In Joseon, without a confession, there was no punishment. The confession was the means by which subjects were made to lay bare and repent for their sins. But if a suspect did not confess, even if the circumstances of a crime were evident, it was believed his morality could be restored with a good flogging. Therefore, the legal procedure ended when a suspect confessed.

The right to remain silent, which is a concept contrary to self-incrimination, was born in 17th century England when the Puritans were tortured and forced to make confessions in the name of God. The United States, which inherited the Puritan tradition, put the right to remain silent in statutory form in the Fifth Amendment to the Constitution in 1791. After that, other countries followed and established it as a basic human right. The Constitution of the Republic of Korea also stipulates, “No citizens shall be tortured or be compelled to testify against himself in criminal cases.”

Han Sang-ryeol, the adviser to the Korea Alliance of Progressive Movements who took an unauthorized trip to North Korea, has resisted investigation by exercising his right to remain silent. This is a man who criticizes the government, calling President Lee Myung-bak “the main culprit of a murder plot” and the government “the puppet regime” of the U.S., while referring to the North Korean leader as “General Kim Jong-il.” Han waited for just the right time to exercise his right to remain silent.

As his activities during his visit were reported by the Korean press, there is no way for him to cover them up now. Rather than exercising the right to remain silent, it would be better for him to confess his wrongdoing and accept the judgment of the law.