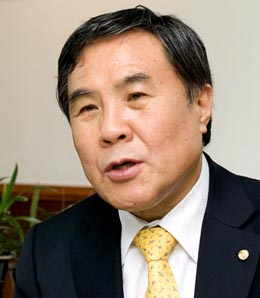 It all began with a small tin savings box that he placed on his desk 35 years ago when he was working at the National Tax Service.

That’s when Cho Yong-keun, chairman of the Korean Association of Certified Public Tax Accountants and chairman of the tax accounting firm Seoksung, began his lifelong journey as an evangelist for charity and volunteer work.

Since he first became a public servant, Cho has been putting small change in the tin box every time he walks into his office.

Nowadays, he puts in 10,000 won ($8.39) every morning as well as small payments he receives from holding lectures.

He asks visitors to do the same when they come to his office for consultations.The money collected from the tin box is put into a bank account for safe keeping and later donated to the local district office to finance social volunteer organizations.

While still working at the tax agency, Cho created a scholarship in 1994 called ‘Seoksung’, which was initially financed by a small property he inherited from his parents. ‘Seoksung,’ is an acronym of his parents’ name.

Cho has also been active in the Bobper Campaign, which is a volunteer organization that has provided meals to the homeless since 1996.

In November, Cho and his employees will celebrate the anniversary of his tax consulting company by visiting Cambodia to open the first Bobper center there. Cho and his company will be donating 50 million won to the project, which is the first branch outside of the country.

When Cho received 50 million won from close relatives and friends who attended his daughters’ wedding, he donated the money.

The gifts might have raised eyebrows among some given the suspicion of bribes to public officials. But Cho said receiving the contributions is acceptable as long as it is returned to society. Cho did not come from a rich family. Instead, his family suffered from severe poverty when he was young, with his younger brother dying from malnutrition.

However, Cho said his past is nothing to be ashamed of. Rather, it persuaded him to believe that someone could receive more by sharing with others.

Even when he was the head of the national tax agency’s public relations department in 2001 and clashed with Korean media companies, including the JoongAng Ilbo, over the government’s tax investigations, he never stopped his volunteer work.

Cho’s passion in helping others has also been handed down to his children.

His daughter, a dentist, donated 2 million won out of her first paycheck of 2.15 million won to his scholarship program.

Cho said in an interview with the JoongAng Daily that public servants are accustomed to taking, but they should be the first to give.


Q. What is your philosophy on helping others?

A. When people ask questions like this I talk about ‘give, and take.’

‘Give and take,’ usually refers to negotiating, but when you place a comma after ‘give’ it becomes ‘give, and take,’ which creates an entirely different meaning.

With just one comma, the meaning can be interpreted that a person who is willing to give without hoping to receive anything in return will get more than what they expected.

People are stringent when trying to give but in life nothing comes free. In receiving people should not think about what to receive and therefore the comma comes after the ‘give.’

What are your principles and beliefs in helping others?

People say they will help others only when they have money to do so.

Such claims are rubbish. In helping others you don’t need to have a lot of money, only the will to do so. And once you have your mind set on it, you should act immediately.

Don’t wait until the time is right because there is no such thing as the right moment.

People think they should only help when they are really rich. When I first created the scholarship program I was only a public servant. Yet I donated as much as I could even though the amount was small.

You don’t have to make a show in giving donations or doing volunteer work.

Those who say that they have nothing to offer right now are people who will not contribute.

Only when you act today and right this moment, can someone truly say you’ve lent a hand in helping others.

There is a lot of volunteer work today. But what do you think is the biggest problem?

More importantly, those that contribute and help others should be consistent. A single event can’t be said to come from the heart.

Such work should be consistent to show dedication and sincerity.

When I started to help others, I was overwhelmed and my life became rich.

As a former tax official it must have not have been easy to dedicate your life to these causes. What would you like to say to your former colleagues?

Public servants were often criticized as a group that claims to help out the general public but fail to do so.

That’s because public servants fail to do the job that they should do.

A true public servant should know how to talk with the public with their hearts and not with their minds.

When I left the tax agency, I was surprised at how few public servants fail to reach the public.

Instead of laying out various policies that claim to help the poor, one true statement that would touch people’s hearts is more effective in changing the attitudes of taxpayers.

Public servants should be the first to learn how to give back to society.