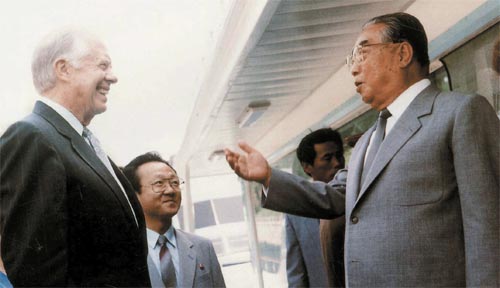 
Former U.S. President Jimmy Carter will arrive in Pyongyang as early as Tuesday (U.S. time) to negotiate the release of a U.S. citizen detained in North Korea, according to American media citing diplomatic sources.

Observers in Seoul are split as to how Carter’s trip will affect the tense inter-Korean relationship following the deadly sinking of a South Korean corvette in March.

The Associated Press and the Los Angeles Times, quoting unidentified senior U.S. officials, said Carter was expected to arrive in Pyongyang Tuesday to try to win the release of Aijalon Mahli Gomes, a former English teacher in Seoul who entered North Korea illegally via China in January this year for unclear reasons. The 30-year-old Gomes was sentenced in April to eight years in jail for illegal entry and unspecified hostile acts.

Gomes was active in Protestant churches and may have followed an American Christian missionary, Robert Park, who entered North Korea in December and was released in February.

Foreign Policy magazine first reported on Monday that Carter was picked from among several possible candidates to help free Gomes, but the U.S. has yet to make an official announcement. The magazine said Carter, accompanying no U.S. government official, is going to the North as a private citizen, not as a representative of the Obama administration.

The news is getting attention in Korea because it’s the first move by the U.S. to talk with North Korea since the March 26 Cheonan sinking near the inter-Korean border, which Seoul and Washington blame on Pyongyang. Forty-six sailors were killed in the sinking. The North denies the accusation.

The government declined to comment yesterday on Carter’s visit.

“We don’t know the details,” said a Ministry of Foreign Affairs and Trade official. “We just understand that it is a humanitarian move to protect a U.S. citizen.”

North Korea has strongly requested a visit by a high-profile U.S. figure to gain the release of Gomes. A U.S. official told the AP that North Korea had agreed to free Gomes if Carter visited.

U.S. officials told reporters that the role of the envoy will be limited to the release of Gomes. They said the visit isn’t connected with additional sanctions on North Korea.

In Seoul, some analysts speculated that the government requested Washington to refrain from negotiations with Pyongyang on any issue until the North apologizes for the Cheonan attack, in case North Korea concludes that the Seoul-Washington alliance is moving past the tragedy.

But other political analysts like Jung Chang-hyun, a professor at Kookmin University, said sending Carter may be a welcome move for some Seoul officials.

“Some within the [South Korean] government think fatigue from the confrontation over the Cheonan issue is mounting and it may be time to pursue an exit strategy,” Jung said. “Carter’s visit may create momentum for the political focus to shift from the Cheonan incident to resuming six-party talks.”

Wu Dawei, China’s top envoy to the Korean Peninsula, is planning to visit Seoul this week to discuss resuming six-party talks to get the North to dismantle its nuclear weapons program.

“As he did when he met Kim Il Sung, Carter will likely stress the necessity of improving the inter-Korean relationship and he will ask the North to pursue that,” Choi said.

Choi said Carter’s visit will also help curb the power of the hard-line military group in North Korea’s leadership by highlighting the role of politicians who are open to dialogue with the outside world.

In August 2009 former U.S. President Bill Clinton traveled to North Korea as a special U.S. envoy and met Kim Jong-il after two U.S. journalists, Euna Lee and Laura Ling of Current TV, were sentenced to prison after illegally entering North Korea. At the time, the North also offered to release them if Clinton came to negotiate their release, and the two journalists were freed.