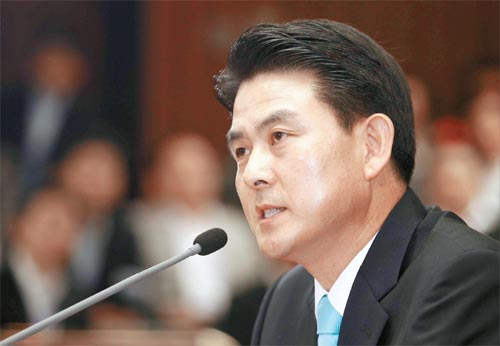 Prime Minister-designate Kim Tae-ho answers a lawmaker’s question during a confirmation hearing yesterday at the National Assembly. He was grilled about bribe allegations, how much his family spends every month and how he accumulated his wealth. [YONHAP]


Prime Minister-designate Kim Tae-ho’s probity was attacked at his much anticipated confirmation hearing yesterday as opposition party lawmakers demanded to know if he took bribes from Busan-based businessman Park Yeon-cha.

Kim, who served as South Gyeongsang governor from 2004 until early this year, was accused of receiving tens of thousands of dollars in April 2007 from Park, then chairman of Taekwang Industrial, in cash allegedly delivered to a Korean restaurant in New York City.

When Grand National Party Representative Kwon Seong-dong asked Kim if he took the money from a waitress at the restaurant, Kim flatly denied it.

“That’s a ridiculous story,” Kim said. “There were rumors about it, but there wasn’t sufficient evidence for indictment and prosecutors didn’t press charges.”

Kim did acknowledge that he knows Park, a local businessman, well.

Liberty Forward Party lawmaker Chough Soon-hyung alleged that Kim had borrowed 1 billion won ($839,000) from banks before the 2006 South Gyeongsang gubernatorial election to fund his campaign. He said Kim had broken the political funds law, which prohibits politicians from using loans to finance campaigns.

Kim said he did not know the details and apologized for his ignorance.

Democratic Party lawmaker Lee Yong-sup questioned Kim about allegations that his wife accepted bribes. Lee argued that a former South Gyeongang government official surnamed Kang was promoted to CEO of the South Gyeongsang Development Corporation not long after he offered Kim’s wife a large sum of money during a 2004 by-election.

Kim was at that time a strong candidate to win the South Gyeongsang governorship, and he later won the election.

“It’s even hard to discuss this issue because it’s total nonsense,” Kim said. “It’s regrettable that lawmakers are just spouting unverified rumors without checking whether they make sense.”

“Appointee Kim frequently traveled overseas for business trips, and you also like playing golf,” Lee said. “How did you manage to increase your wealth more than 300 million won in such a short period of time? And how much does your family spend monthly?”

After Kim responded that his family spends between 4 to 5 million won per month, Lee exhibited a picture of Kim’s wife carrying a Louis Vuitton handbag and asked: “The bag your wife is holding is worth 1.91 million won. How can you buy such a luxury bag with those monthly expenses?”

Kim said, “I bought the Louis Vuitton to celebrate our anniversary.”