Minister-designate in the hot seat at hearing

Minister-designate in the hot seat at hearing 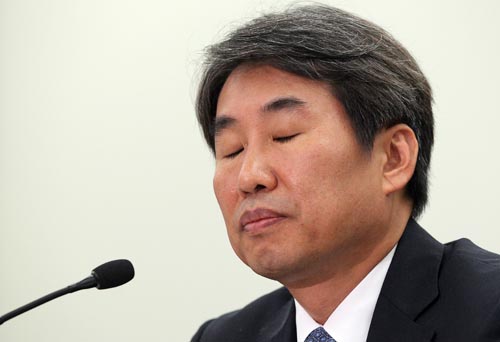 Shin Jae-min, minister of culture nominee, is grilled by lawmakers yesterday over forging addresses to send his children to better schools. [YONHAP]


“I don’t believe you are fit to be a minister!” bellowed Rep. Chough Soon-hyung of the Liberty Forward Party at minister-designate Shin Jae-min for the Ministry of Culture, Sports and Tourism on the third day of the parliamentary confirmation hearings.

When lawmakers asked Shin whether he broke the registration law to send his three daughters to schools with better entrance rates, he denied it.

“My eldest daughter had trouble fitting in at school when we moved from Seoul to Ilsan,” Shin explained. “I had no choice as a father. With the other children, there were conflicts between the school and teachers. I have nothing to say. I’m sorry.”

Shin’s three daughters have all graduated from high school.

There was more apologizing left for Shin to do when lawmakers pointed out that Shin’s wife had hastily acquired jobs when Shin was unemployed in 2004 and 2007 and was overcompensated for her work, because both companies with which she was employed belonged to Shin and his wife’s acquaintances.

“I don’t think she was falsely employed, as implied, because the steps to employ her were legitimate,” Shin said. “However, since she was helped by friends, I acknowledge that we were being too greedy.”

Shin also denied any allegations of property speculation when asked about his ownership of real estate.

When lawmakers demanded Shin step down when “thinking of your shortcomings,” Shin replied, “I have nothing more to say ... and I am sorry.”