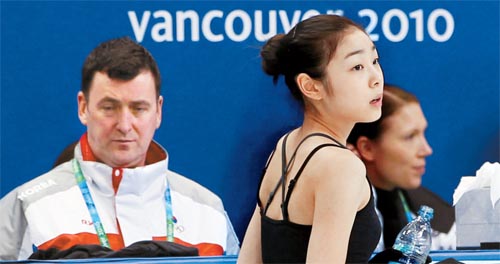 Kim Yu-na will have to search for a new coach after parting ways with Brian Orser. In this file photo, Kim participates in a practice session at the 2010 Vancouver Winter Games with Orser looking on. [YONHAP]


It started out as conflicting parting shots in a relationship gone sour between an Olympic figure skating champion and her former coach. In the latest turn of events, Kim Yu-na yesterday called out her former coach Brian Orser for being dishonest.

Kim posted messages on her personal cyberspace and on her Twitter account, claiming her former coach had been dishonest in his statements in a press release and ensuing interviews with media outlets.

“An athlete and a coach can go separate ways, and there may always be different reasons,” Kim wrote on her Cyworld Mini homepy, or personal home page yesterday. “But, I am disappointed and upset that [Orser] had to let the world know about our dealings through the media, and things that should have stayed between us got out through untruthful tales.”

Kim also posted a message on her Twitter page (twitter.com/yunaaaa) yesterday morning: “Would you please stop to tell a lie, B? I know exactly what’s going on now and this is what I’ve DECIDED,” read the message, which was posted at 5:30 a.m. yesterday.

Kim erased the message later in the day. Orser refused to comment on Kim’s message but stated in a telephone interview with Ilgan Sports on Monday: “I did not make the decision but her mother made the decision for me. I was not provided with any explanations or reasons for the decision.”

Orser has stated in other interviews that Kim’s mother and her decisions were the determining factors in the rift between him and his pupil.

“It was very much a surprise. There was really no valid reason,” Orser was quoted as saying in an interview with the Toronto Star. “I still don’t understand why they did this. I don’t know. It came out of the blue.

“I spoke with her the other day … She seems confused about what’s going on. Because of all this turmoil with her mother, she doesn’t know what’s going on. Nor do I. That’s what I said to her, ‘I’m a little confused, but it’s been a great four years.’”

Orser said he was disappointed that Park and Kim had made decisions not to participate in the Grand Prix and the World Championships next year without consulting him first.

However, Kim and her mother Park Mee-hee - the head of AT Sports, which represents Kim - have been telling a completely different story. According to AT Sports, relations between Kim and Orser were strained after Orser received an offer to coach another skater - rumored to be Kim’s Japanese rival Mao Asada - in May.

In the post, Kim denied her mother was solely responsible for the decision to part ways with Orser. She also said speculation about a strained relationship due to another skater had been blown out of proportion.

“Do you really think that I’ve been training happily for the past four years without any problems just as it seemed on the surface?

“This could have ended more agreeably,” she wrote. “I want this over now. I swear to God that we were cautious in our approach and did not do anything disrespectful to the other party.”