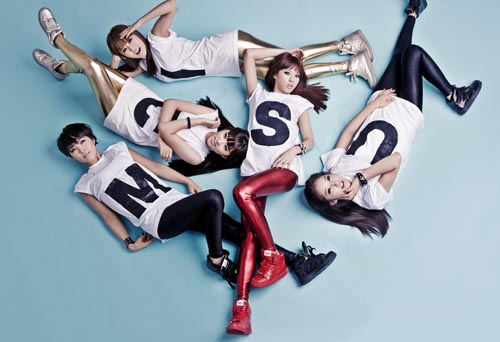 
When Hyun A, a member of the idol group 4minute, appeared on the TV program “Quiz to Change the World” - a nationally televised program that promotes itself as suitable for family audiences - it prompted a flurry of angry comments on the station’s Web site from netizens who complained that her sultry “pelvic dance” was too provocative for a 19-year-old.

In video from the show, the camera zooms in on Hyun A’s bare thighs as she shakes her pelvis, and then it moves on to capture some male guests and hosts in their 30s and 40s who are cheering her on.

“It is true that some find the dance provocative and inappropriate, yet all she was doing was showing what the lyrics say,” said a manager of the group who wished to remain anonymous. “Our company does not see her moves as sexy or inappropriate.”

But not all agree.

The increase in the number of young teenage singers, as well as the overall decrease in their age, has some questioning the use of suggestive themes, provocative lyrics and flashy dance moves to promote teen stars to a public that prefers sexy costumes and dances.

Early idol groups such as g.o.d,, COOL and Shinhwa had an average age of 22, 21 and 19, respectively, when they were introduced in the 1990s. But the average age of today’s singers has decreased to as young as 15 or 16 years, and each of the nation’s up-and-coming idol groups has at least one teenage member in its ranks.

“Because the demand for teen singers is increasing, and because teen groups have been found to be more profitable, entertainment companies are working harder to catch up with demand,” said Kim Eun-a, head of public relations at SM Entertainment, a major entertainment company that represents groups such as BoA, TVXQ, Kangta, Girls’ Generation and SHINee.

Most recently, the debut of the girl group GP Basic raised eyebrows because the average age of the group is 15. The youngest member is a sixth-year elementary school student.

The survey of 103 entertainers aged 9 to 24, conducted by the Ministry of Gender Equality and Family, found that 60 percent of female respondents, who are younger than 19, said they were forced by their agencies to expose their bodies against their will to create sexy images.

But despite the increasing number of young entertainers, the nation’s governing body for broadcasting has no specific rules on teenagers working in the industry.

“The mere enforcement of certain laws has a limited effect, and rights such as the freedom of expression become an obstacle to these laws and even to the introduction of new laws,” said Lee Jae-jin, a journalism and mass media professor at Hanyang University. “Rather than restricting such activities, it would be better to change what the public expects of idol singers and react for their safety by implementing minimum regulations and giving them the freedom to do what’s right for themselves.”

*This article was written with the help of JoongAng Daily reporter Sung So-young.