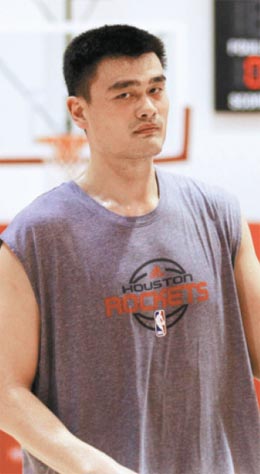 HOUSTON - Chinese center Yao Ming is confident that he’ll be ready for the start of the NBA regular season after a Houston Rockets doctor declared his surgically repaired foot fully healed.

Yao missed last season after undergoing complex surgery on his left foot in July 2009. Team doctor Tom Clanton has cleared Yao to resume basketball activities. The Rockets had said all along that they expected Yao to play in 2010-11. Yao was still relieved when he got the official diagnosis.

“I am very excited,’’ Yao said on Tuesday. “I am just looking forward to playing a great season. I think I can count on my foot now.’’

The 2.29-meter (7-foot-6) Yao sweated through a gray T-shirt during a vigorous workout for reporters at the Toyota Center. He mostly worked on post moves with teammate Chuck Hayes and 2.14-meter (7-footer) James Cripe, a player in the NBA’s developmental league.

He landed awkwardly on his left foot at one point, wincing in pain. He resumed the workout a few seconds later and said he’s less afraid to test the foot than he was two months ago, when he started running again.

“That’s just the confidence,’’ Yao said. “I think everybody would have that after a foot injury, and [I’m] just still a little bit weak on that. I just need to continue to build on that. Compared to two months ago, it’s really a lot better.’’

General manager Daryl Morey said the team will be cautious with Yao and limit his minutes early in the season. Morey said Clanton’s diagnosis was a “key hurdle’’ in Yao’s road back.

“It’s great news,’’ Morey said. “It’s what we anticipated, but until you get over these milestones, you’re never for sure. He looks like his old self. He still has a ways to go on his wind [fitness] and things like that. But it’s just good to see him out there.’’

Early in his recovery, Yao had doubts about his future. In the month after he was told that he would likely miss the 2009-10 season, Yao said he secluded himself and hoped to find out later that the doctors had somehow made a mistake.

“That was really a hard month for me,’’ Yao said. “I got a lot of phone calls from the Rockets staff, coaches, players, teammates and my friends and of course, my family will always be there to stay with me.

“That was the hardest time, [and it’s] already passed. Now, we’re looking forward and making something good.’’

The Rockets open training camp on Sept. 25. They will travel to China in mid-October for two preseason games against New Jersey.

At this point, Yao seems more concerned about rebuilding his stamina than reinjuring his foot. He said he’s lost 40 pounds (18 kilograms) in the last three months, and he still wants to lose 10 to 15 more pounds before the regular season begins.

“I’m really, really not in good shape right now,’’ he said. “I’m probably a little bit away from game shape. The good news is we still have one month until training camp, and two months to the season.’’

A seven-time NBA All-Star, Yao has averaged 19.1 points and 9.3 rebounds in seven seasons since the Rockets drafted him with the No. 1 overall pick in 2002.

Yao, who turns 30 on Sept. 12, said he’s fought the urge to push himself too hard as he tries to regain his old form. The Rockets’ medical staff advised Yao throughout his recovery that he needed to scale back his workouts.

“The doctors say, ‘No, you need to slow down,’” he said. “‘Step by step, you need to learn walking before you start running.’ That’s what they said. They said I’ve got to be patient with it. But I’m very happy.’’