For Yoon, the struggle is mental

For Yoon, the struggle is mental 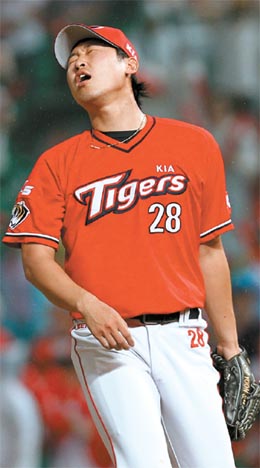 Yoon Suk-min has sought treatment for depression. By Lim Hyun-dong

Things were not going too well for the defending champions Kia Tigers of the Korea Baseball Organization of late. And now, Yoon Suk-min, feeling guilty over recent pitching incidents, is receiving treatment for depression and panic attacks since Wednesday and is out indefinitely.

The news could not have come at a worse time for the Tigers. With the team playing poorly of late, its chances of overtaking the Lotte Giants in the league standings for the fourth and final playoff spot is getting slimmer by the day. Kia dropped its game on Wednesday to the LG Twins, 8-7, and currently is fifth place in the league standings with a record of 51 wins and 63 losses and trails the Giants by five and a half games.

Yoon, the team’s closer and former starter, entered treatment yesterday and it is difficult to tell at this point how long it will take the former national team starting pitcher to regain his confidence and a peace of mind.

The 24-year-old has not been the type of reliable help for the Tigers he had been in the past. Known to be a quiet introvert, Yoon broke the pinky finger in his throwing hand after punching a locker room door out of frustration upon losing to the SK Wyverns 4-3. Yoon was sidelined for six weeks for the episode. While Yoon was recovering from his injury, the Tigers went on a woeful 16 consecutive game losing streak.

Yoon returned to the lineup on Aug. 10, a little earlier than the initial expected recovery time. However, in the Aug. 15 game against the Giants, Yoon inadvertently hit Lotte’s designated hitter Hong Sung-heun in the left hand with a pitch. Hong, who had been hitting .356, 26 home runs, 113 RBI and 86 runs scored - has been sidelined for the rest of the season. Then came another game against the Giants on Tuesday when Yoon hit Cho Sung-hwan in the head with a pitch. The fact that the opponents were the Giants, who are longtime rivals of the Tigers and locked in a battle for the fourth and final playoff spot, and Cho’s history with head injuries resulted in irate fans at the Sajik Stadium in Busan throwing water bottles onto the field.

Since returning to the lineup earlier this month, Yoon had posted a record of two wins and two saves - all against the Lotte Giants - and allowed one run in eight innings pitched over the span of six games.

“Yoon’s presence in our lineup in the month of August was huge,” said a Kia Tigers official. “Our bullpen stabilized after Yoon’s return but with him sidelined again, there are doubts about whether we can reach the playoffs at this point.”

A graduate of Yatap High School in Seongnam, Gyeonggi, Yoon made his KBO debut in 2005 and was thrust into the role of closer and setup man in his first two seasons.

He earned a starting spot in 2007 and was selected to the gold medal winning 2008 Beijing Olympic squad, pitching in five games as a relief pitcher and posting a record of two wins and one save with 2.35 ERA in five games. Yoon would repeat his impressive performance for the national team at the 2009 World Baseball Classic, where Korea would eventually finish runner-up to Japan. In the process, he solidified his status as one of the best young right-handed pitchers in the KBO.

He returned to the Tigers and pitched in both the starting rotation and out of the bullpen to help the Tigers to its first Korean Series title in 12 years last season.