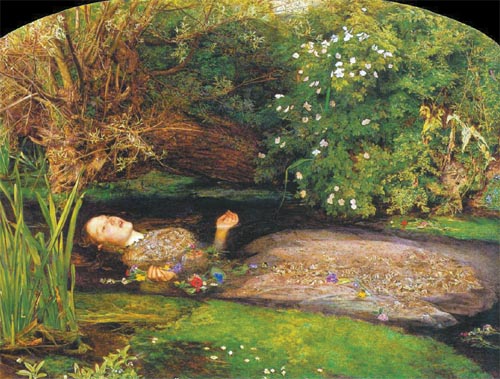 
“There on the pendent boughs her crownet weeds / Clambering to hang, an envious sliver broke / When down her weedy trophies and herself / Fell in the weeping brook. Her clothes spread wide / And, mermaid-like, awhile they bore her up / Which time she chaunted snatches of old lauds / As one incapable of her own distress / Or like a creature native and indued / Unto that element.”


“Ophelia (1851-52)” by English painter John Everett Millais (1829-1896) faithfully depicts the lines above about the death of the heroine of William Shakespeare’s tragedy “Hamlet.”

An endless number of topics could be drawn from this impressive painting - about the subtle facial expression of Ophelia, who went mad from the deep emotional distress she experienced following the death of her father and who faced a sad liberation from this agony; about Elizabeth Siddal, the model portraying Ophelia in this painting, who was as beautiful and unhappy as the heroine of Hamlet; and about the many scenes from movies and music videos inspired by this painting.

But depiction of the natural elements surrounding Ophelia is also a good topic of discussion for this painting. The water plants and bushes around the stream are rendered so realistically and elaborately that viewers may feel as if they are seeing a real stream in the English countryside. Thus, we can easily empathize with Ophelia’s expression, which seems to indicate she is accepting death as easily as if she were accepting nature’s embrace.

Such a realistic and meticulous depiction of nature is characteristic of works by Pre-Raphaelite Brotherhood artists such as Millais. Pre-Raphaelites tried to depict nature in ways that were different from the formulaic and idealized forms of nature in academic paintings. The odd name of the artists’ group itself shows their rejection of the artificial mannerisms of the academy, which considered the Italian Renaissance master Raphael as the primary example for artists. Unlike most artists of their time, they embraced artists from before the Renaissance. 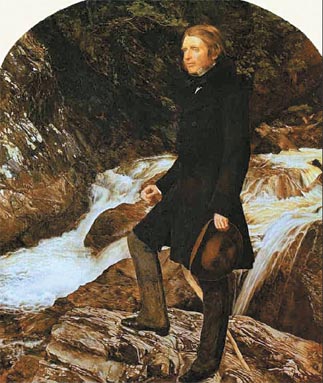 They were influenced by John Ruskin (1819-1900), an art critic and social economist of their time. Ruskin hated industrialization and, especially, mass production by machines. He looked for alternatives in nature and the works of the craftsmen of the Middle Ages.

Millais’ portrait of Ruskin is indeed a painting created of Ruskin, for Ruskin and, indirectly, by Ruskin. Every undulation of the mountain stream and every rocky surface in the painting is elaborately depicted, based on Millais’ precise observations of the scene. It was Ruskin’s belief that artists should “go to nature in all singleness of heart . . . rejecting nothing and selecting nothing.”

Ironically, it was on his trip to Scotland with Ruskin to make the portrait that Millais fell in love with Ruskin’s wife, Effie, who was also on the trip. In the year the painting was completed, Effie divorced Ruskin to marry Millais.

In Millais’ defense, there were other factors that caused Ruskin and his wife to separate, including Ruskin’s refusal to consummate their marriage. The reason for that is not clearly known, but some have said that Ruskin had a fear of seeing a woman in the nude in real life, as opposed to the idealized nude depicted in paintings. If that was true, Ruskin certainly contradicted himself.

After the divorce, things grew awkward between Ruskin and Millais, and Millais later left the Pre-Raphaelite Brotherhood. 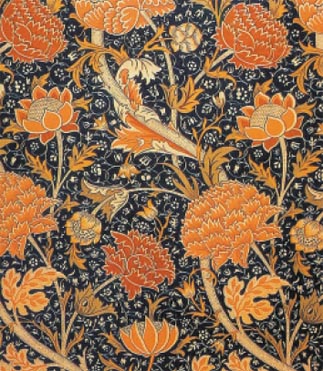 A pattern designed by William Morris

Another artist, however, continued to faithfully embody Ruskin’s philosophy till the end. He was William Morris (1834-1896), who led the Arts and Crafts Movement against mass production. At first, Morris had intended to be an architect, as he was impressed by Ruskin’s books on the relationship between architecture and social ethics. He later became a painter under the influence of the Pre-Raphaelites.

However, he soon came to feel that, as a painter who only stayed in his studio, there was a limit to the amount of beauty he could bring to the lives of ordinary people. He increasingly began to focus on the decorative arts, and he is now known for being one of the earliest designers to elevate objects from everyday life to the level of art.

Morris’ Arts and Crafts Movement was based on Ruskin’s philosophy about ideal artisans. Ruskin admired Middle Age craftsmen, who he thought created each tapestry, piece of furniture and wall decoration out of a deep reverence for nature and a respect for the patterns found therein.

Ruskin believed the ideal society would only come when all manufacturers became artisans. He was furious about the situation of factory workers during the Industrial Revolution.

Ruskin’s beliefs had a great influence on Morris, whose designs of textile and wallpaper patterns reflect his precise observations of nature while also embodying the mystical ambience of Medieval tapestries. He dealt with a wide range of decorative arts, including furniture and stained glass, and founded the decorative arts firm Morris, Marshall, Faulkner & Co. with a group of other artists in 1861. The artists described their firm as a workshop of art laborers who were reclaiming creativity and the joy of labor, both of which had been subsumed by the standardized process of manufacturing during the Industrial Revolution.

Morris was also a socialist activist for a while. At a glance, the aestheticism of Morris’s designs and the ideology of socialism seem far removed from one another. But his desire to improve the conditions for laborers and creative artisans was certainly in line with the labor movement.

However, this does not mean his ideas were free from contradiction, either. The elaborate works created by artisans came at a high price, which meant that they were way beyond the reach of the working class. Similarly, the works of the craftsmen of the Middle Ages were mainly for noblemen and for the church. Nevertheless, his advocacy for creative labor and his disdain of mechanization still has resonance today.