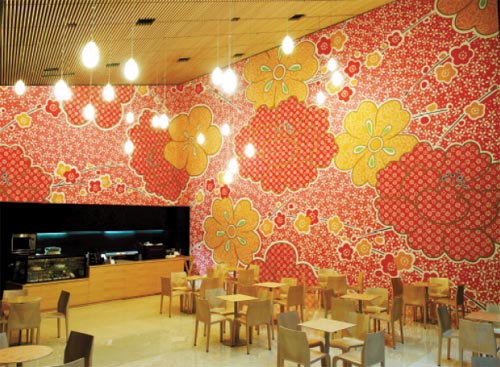 
A group of blue neon letters that read “Memories of the Future” shines on the exterior wall of the Leeum Samsung Museum of Art’s Museum 2, symbolizing the opening of the museum’s first exhibit in two years. Since early 2008, the museum in the Yongsan District central Seoul has quietly exhibited only its permanent collection, in the aftermath of a slush fund scandal involving its parent conglomerate Samsung.

The flashy neon sign, created by French artist Laurent Grasso, is part of the exhibition of the same title, featuring 58 works by 11 local and foreign artists.

“[The paradoxical title] could be understood as symbolizing the realm being explored by contemporary art - a realm that has long been considered impossible,” said Woo Hye-soo, senior curator of Leeum.

The works are arranged to make the best use of the museum’s spaces.

Large-scale paintings by the Taiwan-based Michael Lin grace the walls of the museum’s cafe and the floor adjacent to the auditorium. The paintings are based on the mass-produced floral fabrics common in Taiwan but, ironically, have been created through meticulous manual labor. They are reminiscent of traditional Chinese patterns and show the artist’s identity.

Elsewhere, the museum’s glass walls serve as the backdrop for text messages by the Hong Kong-based artist Tsang Kin-Wah. From a distance, the ambiguous and incongruous messages look like decorative flower patterns, adding to their ambiguity.

The side walls and ceiling around the escalator leading to the Ground Gallery hold drawings made of black tape that were created by the New York-based artist Sun K. Kwak.

“The works by Tsang, Lin and Kwak, along with Grasso’s, are temporary installations that exist only during the designated exhibition period,” Woo said. “The artworks will evaporate, leaving only the artists’ concepts. Thus, the physical aspect of the artwork is less important than ever before, raising the question ‘Are art works eternal?’”


Sculptures by Shin Mee-kyoung, installed in the museum’s restrooms, also seem to raise this question. Because they are made of soap and are available for the public to use, the sculptures will also vanish in time.

“Many of the works also seem to ask if images are capable of conveying truth,” Woo said, citing Grasso’s work. “The title, ‘Memories of the Future’ is nonsensical and illogical but it could be interpreted as meaning that memories of the present become the past in the future.”

From this perspective, the work has some ambiguous truth, she said.

Similarly, the works of French writer and artist Sophie Calle lie on the border of truth and fiction.

“The Husband,” a group of 10 photographs and texts installed at the Ground Gallery, show the artist’s memories of her encounter with and separation from her ex-husband. However, sentences such as “the most truthful story in my life concluded with a fake wedding” could make viewers question whether this is a true story or fiction.

Other works at the Ground Gallery include the so-called “photo-sculptures” by Gwon Osang, which are sculptures of human figures covered with photos of themselves, and the humorous sculptures by Gimhongsok that replicate well known contemporary artwork by artists such as Jeff Koons, using everyday materials like garbage bags.

Other participants include the local artist SASA[44], Jackson Hong and the German artist Dirk Fleischmann.