“Piranha 3-D” has a pretty star-studded cast for what might appear to be a B-movie horror film. The ensemble of people trying to fight off thousands of recently awakened man-eating fish include Richard Dreyfuss, Ving Rhames, Jerry O’Connell and even Christopher Lloyd of “Back to the Future” fame.

And after an earthquake near the pristine Lake Victoria causes these prehistoric monsters to start to attack unsuspecting college kids on their spring break, this cast of characters must work together to figure out how these piranhas were reawakened after being dormant for millions of years and how to get rid of them. The film features plenty of frights, blood and gore - including a scene in which Rhames’ character kills off several of the fish with the spinning blades of a motorboat - and is probably what you’d expect from a film about killer piranhas.

Really, if horror and blood is your thing, it’s probably hard to go wrong with a film like “Piranha 3-D.” 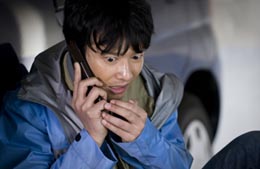 In what is director Yoshihiro Nakamura’s third film based on the best-selling novels by Kotaro Isaka, “Golden Slumber” tells a tale of conspiracy, friendship and humanity. Aoyagi (Masato Sakai) meets old friend Morita in Sendai for a fishing trip, but when his friend tells Aoyagi he was forced to frame him for killing the newly-elected prime minister, everything begins to unravel.

Simultaneous explosions kill Morita and Prime Minister Kaneda and Aoyagi must go on the run as police put together clues that tie him to the deaths. Along the way, Aoyagi meets a bizarre cast of characters that help him get by, including a famous pop star, an old gangster and a more-than-happy serial killer.

“Golden Slumber” is more about human interaction than action-thriller fun, focusing on Aoyagi and the characters he meets on his journey to prove his innocence. But those looking for action probably won’t be disappointed.

All is normal in Nic and Jules’ Southern California lives: their two teenage children - Joni and Laser - are in the midst of their normal angst-y years, and the couple themselves (played by Annette Bening and Julianne Moore) are going through the typical challenges of marriage. It’s when the children decide to find their biological father that things become a bit messy in this comedic but poignant story of a modern family. The two mothers gave birth to Joni and Laser, but the sperm came from an anonymous donor. The donor, it turns out, is a restaurateur and organic gardener named Paul (Mark Ruffalo). His abrupt entrance into the family creates a bevy of conflict, hurt feelings and socially awkward scenes - eventually even spiraling into a heterosexual dalliance between Paul and one of the mothers.

“The Kids Are All Right,” which made a big splash at the 2010 Sundance Film Festival, is a compelling modern American story - the fact that it’s anchored by a same-sex couple is a given here and not the source of political and moral hand-wringing - that at its core asks the audience what it is that truly defines a family.

In this action-packed domestic thriller, two medical patients who by happenstance are placed in the same hospital room realize they share some history. Or at least one of the two does, since the other suffers from amnesia. Min-ho (Chun Ho-jin) realizes that the guy lying next to him was his wife’s murderer. Sang-eop (Yoo Hae-jin) is oblivious until he takes some new-fangled medicine and suddenly notices the awkward situation he’s found himself in. Then the two fight. Bedridden and unable to move because of a stroke, Min-ho goes to great lengths to try to avenge his wife’s death.

Directed by Jo Won-hee and Kim Sang-hwa, “Desire to Kill” is a violent film, but it has been lauded for its strong cast, a rather intricate plot and an injection of humor that helps lighten the movie.

“Predators” is a reboot of a 23-year-old franchise that usually features grizzled humans in a fight against the alien Predators.

In this version by producer Robert Rodriguez and director Nimrod Antal, a group of killers are dropped in the middle of a jungle on another planet with no idea why they are there. Pretty soon they figure out that the Predators are using them as prey and the cast, featuring Adrien Brody, Alice Braga, Topher Grace and Laurence Fishburne, must work together to take down the aliens - or die.