A shameful anniversary: Korea’s annexation, 100 years later
The painful echoes of a poisonous past 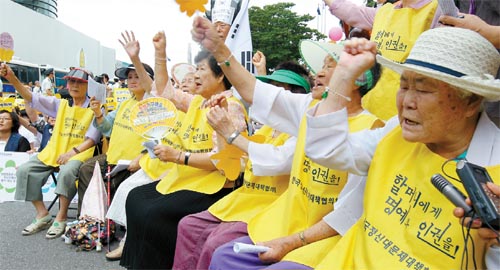 Women who were pressed into sexual slavery by the Japanese military during the colonial period protest in front of the Japanese embassy in Seoul on Aug. 11. By Cho Yong-chul

This Sunday marks the 100th anniversary of the annexation of Korea by Japan, which took place when the Japan-Korea Annexation Treaty came into effect. Korean Emperor Sunjong refused to sign the treaty, but the prime minister illegally signed it in his stead on Aug. 22, 1910. To this day, the Japanese government has not acknowledged that the treaty was illegal, a fact that still causes controversy and protest in Korea.
This three-part series will focus on the history of the annexation, the tragic legacy of colonialism and what lies ahead for both countries in the future.

The crowd of red young faces leaned forward, listening to the woman speaking into the microphone. Despite the muggy, 32-degree Celsius (89.6 Fahrenheit) weather, roughly 500 young people turned out Aug. 18 to bear witness to an atrocity that occurred decades before they were born.

“All the 14-year-olds here, raise their hands,” said Yoon Mee-hyang, executive official of the Korean Council for Women Drafted for Military Sexual Slavery by Japan.

Hands flew into the air, some attached to giggling kids, excited to participate.

More hands. By the time Yoon had reached 18, most of the young students had puzzled looks on their faces.

“The Japanese soldiers took girls your age and forced them into sexual slavery,” Yoon said into the microphone. “Girls like you.”

It was the 931st weekly demonstration by the council. Chants were shouted, letters were read and volunteers put on performances to show their dedication to the cause. They gathered in front of the same tightly sealed building they had gathered near 930 times before, and they received the same response: silence.

The protests known as the “Wednesday demonstrations” have been taking place in the same spot in front of the Japanese embassy every week since Jan. 8, 1992. The demonstrators include surviving victims of a program that drafted sexual slaves to serve the Japanese military during the colonial period. Called by the wartime Japanese using the euphemism “comfort women,” they are there to demand an official apology and compensation from the Japanese government.

At least five Japanese prime ministers since 1992 have apologized to the surviving comfort women, but the protesters say these statements are often in carefully couched terms designed to protect the government from liability and almost never discuss victim compensation. 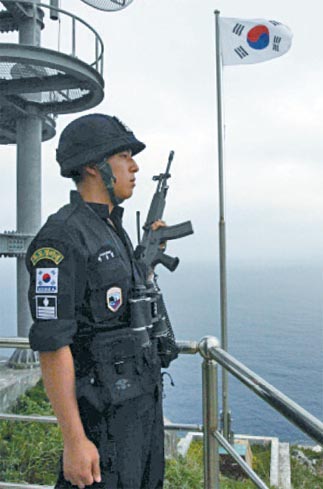 A Korean policeman stands guard at his post on one of the Dokdo islets. Provided by the National Assembly Press Corps

Then-Japanese Prime Minister Tomiichi Murayama set up an Asia Women’s Fund in 1995, accompanied by an apology, but the group was not state-run and was backed entirely by private money. The fund completed its work in 2007 and was disbanded. Critics say the AWF was privately run as a way for Japan to avoid admitting legal responsibility for the comfort stations.

With many of the victims dying of old age, the council for former comfort women feels they are running out of time.

“Two hundred thirty-four victims have come out and told their stories of [sexual slavery],” Yoon said. “But today, there are only 83 still alive.”

According to documents from the era, girls as young as 9 were taken by Japanese military to become “comfort women” during Japan’s military expansion in Asia and World War II, but for many years they remained silent.

“The entire world was oblivious until the 1990s. No one knew that this had happened,” said Doh See-hwan, a research fellow of international law at the Northeast Asian History Foundation in Seoul. “Korea underwent a transition starting in 1991 with the first public testimony in August by a woman named Kim Hak-sun.”

The military brothels known as “comfort stations” were first set up in the Japanese concession in Shanghai in 1932. The first comfort women were Japanese prostitutes who volunteered, but when the war spread to Southeast Asia the military soon began drafting women from Japan’s imperial possessions. Korean women from teenagers to ladies in their 40s were taken to these brothels in the 1930s. Press reports and records show that roughly 200,000 women from across Asia were taken by force to become comfort women for the Japanese military.

“Not only does Japan have a moral responsibility to these women, it has a legal one as well,” said Seo Hyun-ju, research fellow at the Northeast Asian History Foundation. “The Japanese government has said that they have already apologized and compensated the women, but it was through a private fund with private money. These women don’t need just the money. They are looking for an official apology from the government.”

Said Yoon: “We would like a solution before the 100-year mark passes.”

The comfort women issue is just one of the intractable disputes that continue to mar relations between Korea and Japan. 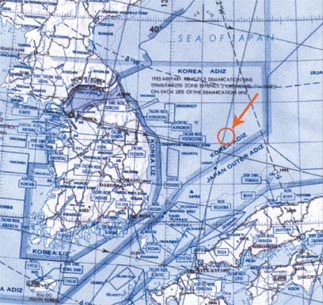 An arrow indicates Dokdo on a U.S. Air Force navigation map from 1987 that shows the islets within Korean territory. [YONHAP]

Korean civic groups have been riled by history textbooks used in Japan that do not include any mention of comfort women and diminish other wartime atrocities committed by the Japanese, including the sacking of Nanking in 1937. The books, created by Fusosha Publishing Inc. and the Japanese Society for History Textbook Reform, have been in use in a small number of Japanese middle schools since 2002. Scholars and the public have criticized them for “beautifying Japanese history and negatively narrating other countries’ history.”

Seo said the textbooks “do not acknowledge the invasion [of China and Southeast Asia] as an invasion.”

“They narrate the invasion as something they had no choice but to do for the good of Asia, and call it justifiable. The textbooks explain that Japan invaded the Korean Peninsula to fend off the Russians.”

Partly due to their controversial content, the textbooks with the watered-down version of the Korean colonization story are used in less than three percent of Japanese schools, but critics continue to condemn their approval by the Japanese Ministry of Education in the first place.

Yet the textbook issue is a minor one compared to the most explosive outstanding dispute between Korean and Japan: the conflict over a set of islets between the two countries that Korea calls Dokdo and Japan calls Takeshima.

“The Japanese Ministry of Education has set the maps in all elementary school textbooks to include Dokdo, or Takeshima as Japan calls it, as part of Japan’s territory,” Seo said. “They will do the same for middle school textbooks starting next year.”

Korean and Japan have been squabbling over the islets since the late South Korean President Syngman Rhee decreed Korea’s official borders in his “Peace Line” declaration on January 18, 1952.

Ten days after the declaration, the Japanese government protested, calling it a unilateral act in contravention of international law. Though Japan continues to claim the islets, Korea has possession of them and maintains an official civilian base there with two permanent residents.

There are no signs the conflict will end soon. Shimane Prefecture, the Japanese locality that claims the islets, declared “Takeshima Day” in 2005, sparking protests and demonstrations in Korea, including one case of self-immolation.

“There is a limit to what we can do right now on this issue, because territory and sovereignty are things that are difficult [for a nation] to give up,” said Seo.

A final important issue that has emerged in recent years is the legality of the treaty under which Japan annexed Korea in 1910.

Though earlier this month Japanese Prime Minister Naoto Kan apologized for his country’s colonization of Japan, he did not denounce the annexation treaty as illegal and forced on Korea, which Doh favors.

“The initial signing of the document itself was an unlawful act, because [Prime Minister] Lee Wan-yong did not carry the diplomatic power required to sign such a treaty,” said Doh.

Lee was the pro-Japanese official who signed the treaty when Emperor Sunjong refused to do so.