Ex-wife of Tiger Woods has been through ‘hell’

Ex-wife of Tiger Woods has been through ‘hell’ 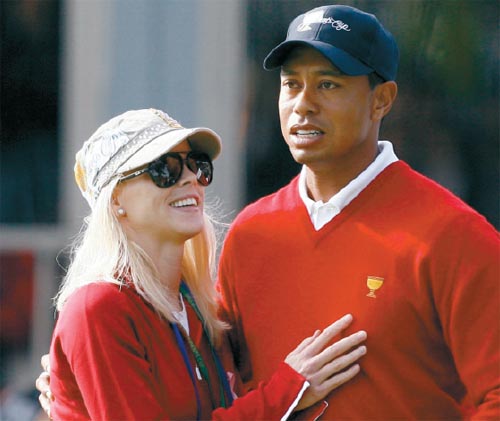 Tiger Woods hugs his then-wife, Elin Nordegren, during a golf tournament in San Francisco, California, in this 2009 file photo. [REUTERS/YONHAP]


NEW YORK - The now ex-wife of Tiger Woods has broken the silence she maintained through the ordeal of dealing with the torrid sex scandal that engulfed their marriage, saying she has been through “hell.”

Elin Nordegren spoke to People magazine in an interview published on Wednesday, two days after she and Woods issued a statement confirming their divorce, which had been widely anticipated for months after his public confession of infidelity.

“I’ve been through hell,” the Swedish-born former nanny told the publication. “It’s hard to think you have this life, and then all of a sudden - was it a lie? You’re struggling because it wasn’t real. But I survived, it was hard, but it didn’t kill me.”

Nordegren, 30, who met Woods at the age of 21 while minding children for a Swedish golfer but is now studying psychology, said she never suspected the affairs that Woods, reputed to be the world’s wealthiest sports star, admitted to and publicly apologized for in February.

“I’m so embarrassed that I never suspected - not a one. For the last three and a half years, when all this was going on, I was home a lot more with pregnancies, then the children and my school,” she said.

Woods, who has won 14 major championships, returned to the game in April after losing up to $35 million in sponsorship revenue as his private life unraveled over allegations that surfaced in late November and December about affairs between him and several women.

The revelations surfaced after a middle-of-the-night car accident at the couple’s luxury Florida home where Woods crashed into a tree and a fire hydrant. Nordegren told police she smashed the car’s back window with a golf club to get him out. Nordegren told People that she did not hit Woods on the night of the car crash.

“There was never any violence inside or outside our home,” she said. “The speculation that I would have used a golf club to hit him is just truly ridiculous.”

Since then Nordegren said she has experienced various emotions. Woods and Nordegren share custody of a 3-year-old daughter and a 1-year-old son.

“The word betrayal isn’t strong enough. I felt like my whole world had fallen apart,” she said, before later adding, “I have been through the stages of disbelief and shock, to anger and ultimately grief over the loss of the family I so badly wanted for my children.”

Of the settlement she received, which neither she nor Woods has disclosed but People estimated to be worth $100 million, she said it wasn’t worth splitting up her family.

“Money can’t buy me happiness,” she said. “Or put my family back together.”

Praised for maintaining her privacy through the ordeal, Nordegren, who disclosed she suffered weight and hair loss from stress before the divorce, said she wanted to protect her children.

“For my kids, I felt that [maintaining privacy] was the only normalcy I could give them, since they have a very famous dad,” she said.

Nordegren said she has “not watched one minute of golf” since the revelations. She conducted the interview over four visits lasting a total of 19 hours at the rented Windermere, Fla., home where she now lives with their two children.