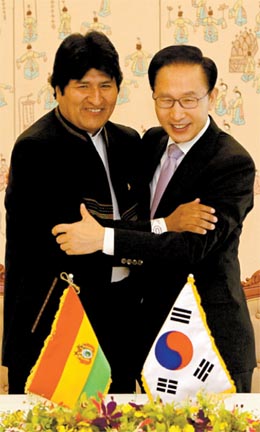 Korea is closer to getting its hands on Bolivia’s vast deposits of lithium, a crucial component in rechargeable batteries, after the two countries signed a memorandum of understanding yesterday.

The government-owned Korea Resources Corporation and Comibol, Bolivia’s national mining company, signed an MOU on research and development for the industrialization of evaporation resources in the Uyuni Salt Flats.

Uyuni is a salt flat in Bolivia that is known to have more than 5.4 million tons in lithium reserves, which is half of the world’s total. Korea imported $666.8 million worth of lithium last year from mainly Chile. With the rise of Korea’s rechargeable battery industry, imports are increasingly vital.

Competition to develop Uyuni has been fierce with 10 other developed nations, including Japan, France, China, Iran and Brazil. According to the Korea Resources Corporation, 75 percent of lithium water is found in Chile, Argentina and Bolivia, with the resources near Uyuni having not yet been explored. Lithium is commonly extracted from brine pools or dry salt lakes.

A research team from Korea Resources Corporation will also be allowed to visit the pilot plant in Uyuni.

The signing of the MOU came after a summit held at the Blue House between President Lee and Bolivian President Evo Morales.

“The two leaders took note of the fact that the conclusion of the MOU had laid a foundation for the full-blown implementation of collaboration in the development of lithium mines,” the Blue House said in a statement. “The two leaders agreed to closely consult and work together to that end.”

The Bolivian president and officials also met Korea’s four chamber heads and 80 businessmen at a hotel in central Seoul, including Sohn Kyung-shik, chairman of the Korea Chamber of Commerce and Industry, and Lee Hee-beom, chairman of STX Heavy Industries and STX Energy.

At a luncheon, Morales encouraged Korean businesses to boost cooperation with their Bolivian counterparts, emphasizing that “Bolivia’s economic development will accelerate on abundant natural resources.”

Representing Korea’s business groups, Sohn said, “Bolivia, which has resources such as lithium, has accumulated skills and experience in promoting economic development and can be a good partner with Korea.”