Historic library set to be reopened

Historic library set to be reopened 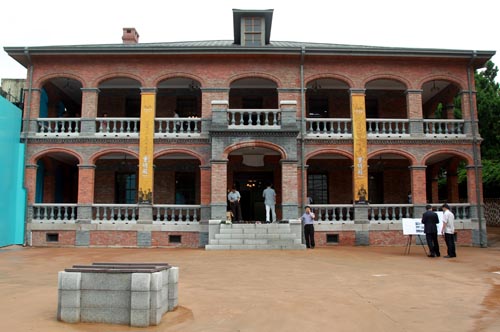 Jungmyeongjeon, an imperial library inside Deoksu Palace, where the Eulsa Treaty was signed against King Gojong’s will to surrender Korea as a Japanese protectorate in 1905, was remodeled to be opened for public viewing this weekend. [YONHAP]


An imperial library inside Deoksu Palace, which served as a reception hall during Japan's colonial rule, will be reopened to the public Sunday after extensive restoration work, the Cultural Heritage Administration said yesterday.

Jungmyeongjeon, meaning "hall of heavy light," was built as the library for the royal court of the Joseon Dynasty in 1897, but it is more remembered as the venue of some of the most shameful episodes in Korean history.

After a fire destroyed much of the palace in 1904, King Gojong used the Jungmyeongjeon as his office.

But the following year, the Eulsa Treaty - which surrendered Korea as a Japanese protectorate - was signed there against his will between Japanese statesman Ito Hirobumi and Cabinet ministers of the Joseon Dynasty.

In 1907, King Gojong sent a secret delegation to the Hague Peace Conference to proclaim Korean sovereignty. But the mission was thwarted by the Japanese, and one of the emissaries, Lee Jun, killed himself in protest.

Japan officially colonized Korea and terminated the Joseon Dynasty in 1910 by signing an annexation treaty.

The Jungmyeongjeon was then renovated and used as a reception hall for foreign dignitaries.

After Korea's liberation in 1945, the hall was left unattended.

In 2006, the Cultural Heritage Administration purchased the royal hall from then-owner Chongdong Theater, and restoration began the following year.

The history of Jungmyeongjeon will be exhibited on the first floor, the heritage agency said.