Their own G-20 Summit

Their own G-20 Summit 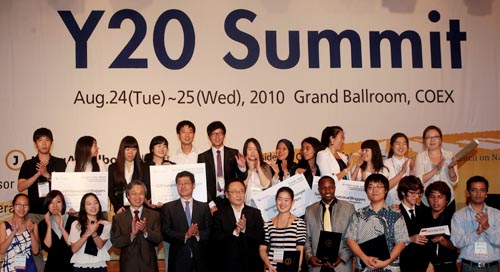 
As the time of the Seoul G-20 Summit grows nearer, undergraduate and grad school students had a chance to participate in a mock meeting of their own at the Y20 Summit held at COEX in Seoul, which came to a close yesterday.

On the final day of the summit, around 100 students, selected from 424 applicants, addressed development and environment issues, touching on such topics as natural disasters and agricultural productivity. Discussions on previous day dealt with financial regulations, security issues and frameworks for strong, sustainable and balanced economic growth.

One delegate from India set the tone before the start of the discussions.

Subhojit Chakladar, 24, asked delegates not to criticize “what specific groups have done wrong [as of now] because this is a session to address the problems of the future.”

The students were grouped into 20 countries and three additional teams representing the International Monetary Fund, the World Bank and the World Trade Organization.

After a joint declaration, six teams were selected as most outstanding participants, based on their logic and persuasion skills, and given prizes.

No matter what nationality or race, pride swelled through the grand ballroom at COEX yesterday as the three-month event came to a close.

“I feel so proud of myself,” said Ro Hyeon-young, 21, who was a Korean delegate. “We had many meetings before the leaders’ summit that went on for hours until late into the night and I think I only slept three or four hours a week [preparing].” Ro said other students should take interest in the G-20 meetings. “Although many students participate in model UN meetings,” she said, “in G-20 you get to respect each nation because individual country’s opinions are really important.”

“The Y20 communique was striking in that it covered the entire agenda for the G-20,” said Sakong Il, chairman of the G-20 preparation committee. Song Pil-ho, JoongAng Media Network president, was also present at the awards ceremony.

The event was hosted by JoongAng Ilbo