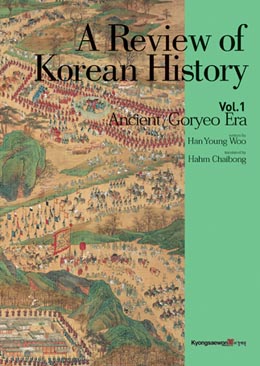 “A Review of Korean History,” the English version of a steady-selling Korean history book by Han Young-woo, gives readers detailed descriptions of Korea’s past, from its origins to the launch of the current government of President Lee Myung-bak and recent trends in North Korea.

Han, a professor emeritus at Seoul National University, revised his original Korean version extensively in 2004 to update it with new facts, while supplementing the parts of older Korean history. The first edition was published in 1997.

The English version was translated from the revised Korean version.

In the introduction, the author gives an overview of the land and culture of Korea and its people.

Beginning with the first humans thought to have lived in Korea, the first volume deals with the emergence of Old Joseon and other ancient states; the establishment and development of the Three Kingdoms and the southern and northern states; and finally the genesis of the Goryeo Kingdom.

The second volume is about the Joseon Dynasty, from its foundation to its reforms of the ruling system, economic development, culture, internal conflicts and foreign invasions.

The final volume handles the birth and growth of modern Korea, starting with the peasant uprisings and “Gabo reforms” of 1894, to the creation and fall of the Daehan Empire, Japanese colonial rule and Korea’s independence movement.

The Korean War and reconstruction in the mid-20th century, the numerous revolutions and governmental crises that followed and the events of the early 21st century are also addressed in the third volume.

In addition to the descriptions of historic events, the book provides details of all aspects of Korean culture and tradition such as literature and music, commerce and international trade, and geomancy and Taoism.

The author, now aged 72, previously served as the dean of the College of Humanities at Seoul National University, as dean of the Kyujanggak Archives.

For more information or inquiry, contact Kyongsaewon Publishing Co. by calling (031) 955-7441, or visit the company’s Web site at www.kyongsaewon.co.kr.

A Review of Korean History