A shameful anniversary: Korea’s annexation, 100 years later
The long struggle to overcome the past 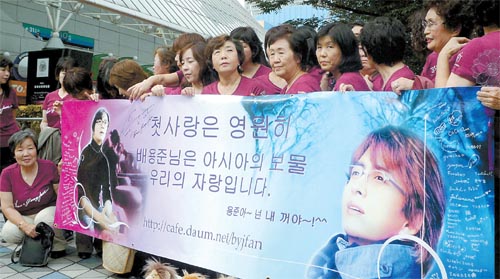 Japanese fans of Bae Yong-joon wait for an event at the Tokyo Dome in September 2009. The banner reads in Korean, “First love is forever. Bae Yong-joon is a treasure of Asia.” [YONHAP]

This Sunday marks the 100th anniversary of the annexation of Korea by Japan, which took place when the Japan-Korea Annexation Treaty came into effect. Korean Emperor Sunjong refused to sign the treaty, but the prime minister illegally signed it in his stead on Aug. 22, 1910. To this day, the Japanese government has not acknowledged that the treaty was illegal, a fact that still causes controversy and protest in Korea.
This three-part series will focus on the history of the annexation, the tragic legacy of colonialism and what lies ahead for both countries in the future.

A few days later, Japanese Prime Minister Naoto Kan said he would “deeply consider” releasing a formal statement near the 100th anniversary of the annexation in 1910.

He ultimately decided to issue an apology on Aug. 10, acknowledging the pain Koreans suffered during the 1910-45 occupation.

The prime minister’s spokesperson Yoshito Sengoku told press earlier in July that they were contemplating what stance to take on the issue, and how to convey the apology if they decided to issue it.

The anniversary of the treaty has prompted numerous movements to mend relations between Korea and Japan and to come to an understanding on historical disputes. Since the country’s liberation on Aug. 15, 1945, public sentiment toward Korea in Japan has gradually improved, helped along in recent years by the “Korean Wave” of pop culture hits, but feelings toward Japan here have remained chilly.

Korea took the first steps to bridge that gap in April 1998, when the government decided to legalize the import of Japanese pop culture, which had previously been banned under the country’s military dictatorships. Then-President Kim Dae-jung ordered the prohibitions to be lifted in phases.

The Korean government also established a state-run organization in 2005 called the Northeast Asian History Foundation. The foundation’s mission, according to its Web site, www.history
foundation.or.kr, is to confront “distortions of history that have caused considerable anguish in this region and the world at large, and [to develop] a correct understanding of history through comprehensive long-term research and systematic and strategic policy development.” 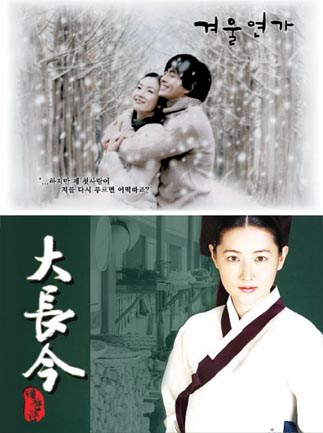 Above, the TV dramas “Winter Sonata,” middle, and “Daejanggeum,” near above, have found large audiences throughout Asia, including in Japan.

The foundation’s Chairman Chung Jae-jung told the JoongAng Daily, “There are many historical conflicts and much opposition between Korea and Japan, and we strive to solve these problems through reconciliation so that the two countries can truly stand as neighbors.”

A former history professor, Chung explained that the two countries have no choice but to grow closer, not only because of geography but also because of their cultural similarities.

Yet the road to historical reconciliation is not without its obstacles.

“Korea and Japan have an extremely complex relationship, and the public’s understanding of history in each country is drastically different,” Chung said. “The fights and disagreements don’t seem to end because there is a gap between what is real and what people know regarding the history between the two countries. It is our duty, as well as the many other groups working towards this mutual goal, to close this kind of gap.”

Researchers of modern Asian history say grassroots events to work toward cross-cultural understanding are the most viable way for the two countries to reconcile at this time and the surest route toward greater cooperation in the future. Cultural exchanges between Korea and Japan have evolved since 1998, when the ban was lifted. Many Japanese have grown to love Korean Wave dramas such as “Winter Sonata” starring Bae Yong-joon, who is a well-known celebrity in Japan - where he is affectionately called “Yon-sama.” The program aired in Korea in 2002 and 2003 and was later broadcast on Japan’s publicly owned NHK in 2004.

“The effect that the Korean Wave has had on bilateral relations between Korea and Japan has been incredibly positive,” Chung said. “Twenty to 30 years ago you couldn’t even picture anyone in Japan liking a Korean actor or even watching a Korean drama. There’s a solid fan base for Korean dramas, and as where the Japanese used to look down on Korean culture in the past, now [the dramas] have become a cultural product.” 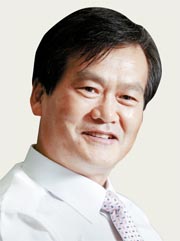 According to the Korea Creative Content Agency, exports of TV dramas pulled in $174.9 million in revenue last year, 70 percent of which came from Japan.

“Another thing that should change to establish better ties with Japan is the historic viewpoint that young people have,” Chung said. “There are so many young people in Korea nowadays who do not know the history of what happened and what was wrong about [the annexation]. And negative opinions just keep building against Japan through the media.

“They need to build the ability to look at things from a wider perspective and not from an emotional one,” Chung added, emphasizing the need for accurate historical knowledge among the public, especially the young.

Huh Dong-hyun, a professor of modern Korean history at Kyung Hee University, believes that the time has come for Korea to discover its own path forward in order to mend ties with Japan.

“Liberation from the Japanese was actually the start of the tragedy,” Huh said. “It did not come from us directly, it was given to us by someone else [the American military]. This is why we were later divided into two countries, because we did not have the knowledge [of being one nation]. And amidst all of this, our country still has that memory of hate for Japan.”

According to the professor, the only way for Korea to reach closure on the national trauma of the last century would be to become a culturally inclusive and truly international nation, open to all people.

“Koreans need to be wary of the tendencies toward fascism within them,” Huh said. “They went through so much discrimination during the colonial period. Now look at them and how they act towards minorities from Southeast Asia who work in Korea. The laborers are looked down upon.

“This is an act of cowardice. We need to look at own shortcomings first.”

Huh also underscored the importance of developing an inclusive society that will deserve the respect of other countries.

“The Japanese government cannot be made to apologize with just anything,” Huh said, adding that culture and diplomatic power must go hand in hand to resolve the ongoing conflicts between the two countries. Huh was skeptical of the Kan statement, saying it was an extension of an earlier apology issued in 1995, and thus did “not look like a step forward.”

“Naoto Kan gave the statement as prime minister, not as an individual,” Huh said. “Government officials and other political officials talk as if it was a great development in the situation, but to me it doesn’t seem so.”

But Chung expressed worry over the fluctuating state of Japanese politics, with four prime ministers stepping down, each after less than a year in office.

“History is entwined with politics,” Chung said. “Many politicians use history to their advantage, so there is a difference with each political leader of a country when it comes to approaching historic conflicts.”

With 100 years since the start of annexation falling this weekend, there is one thing all sides agree on: There can be no future for Korea-Japan relations without reconciliation.