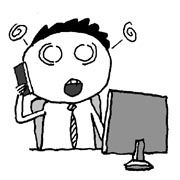 The children have disappeared from the view. He no longer heard the innocent laughter of children at play that had filled the neighborhood streets and alleys. This was why Japanese photographer Keiki Haginoya gave up his life-long passion. In 1979, he began capturing heartwarming moments of children playing in the neighborhoods of Tokyo. But his dream came to an end after 17 years because children stopped playing outside, too busy playing video games and watching television at home instead.

More than 10 years have passed since Haginoya’s dream project ended, and the bodies and minds of the children have been taken over by computers, the Internet and cellular phones. Outdoor games such as hide and seek and marbles are long gone. Elementary school students in the United States reportedly spend an average of four hours a day using digital devices, and their Korean peers are not much different. Grown-ups, too, are not free from the thrall of digital entertainment. In Britain, adults spend 7 hours and 5 minutes, or nearly half of their hours awake, using electronic devices.

The digital world has taken outdoor play from children, while the adults have lost their ability to memorize. According to a 2007 survey of 3,000 Americans, one-third of respondents under age 30 did not even remember their own phone numbers. They felt no need to memorize their phone numbers since they could keep nearly unlimited entries on their smartphones. Phone numbers aren’t the only things we no longer have to bother remembering. When people need information, they turn to Google and Wikipedia. When you need directions, you follow the GPS. People are living without thinking after outsourcing old skills to digital tools.

The New York Times featured a new analysis of the possible causes of digital dementia on Aug. 24. Contrary to the popular belief that people are no longer using their brains because of digital devices, the problem was that our brains are constantly at work. We check our e-mail and Twitter all day while simultaneously watching videos and playing games, and our brains are kept too busy. The brain needs downtime to process new information and store long-term, permanent memories, and constantly overusing the brain hinders this learning process and makes us more forgetful.

It’s not like we need to start a modern-day Luddite movement. But what can we do? If you still have remaining vacation days this summer, why not give up the Internet for a few days and try to reconnect with actual human beings? In your daily lives, you can at least part with your smartphone while you make bathroom visits. The prime minister designate needs to seriously consider my suggestion after showing off his “terrible memory.” Maybe he is suffering from digital dementia after overusing digital devices and tweeting trivial facts about his life, such as his failed attempt to make a fried egg.