Diaries a reflection of history

Diaries a reflection of history 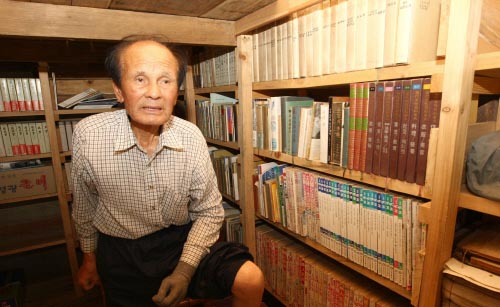 Kim Bong-ho shows off his collection of books and diaries in the attic of his hanok home. [JoongAng Ilbo]


Kim Bong-ho lives in a hanok - a traditional Korean house - in Gwangsan-gu, Gwangju.

The 80-year-old man has kept a diary for 60 years and emphasizes the importance of writing a diary and recording history everyday.

“It’s important to have a habit of writing diaries from very little detail, because one day it will become history,” Kim said.

He repeatedly gives emphasis to the significance of recording and collecting history and said that proper preservation of history becomes the nation’s tradition and culture.

Kim pulled 74 of his diaries from his attic. The diary booklets, that kept information on 60 years of his life, contain varied content, from industrial products in 1950s to college note books. These booklets also describe the economic conditions of the time.

It’s not just his diaries that he kept with him for long time. His tiled roof hanok, which became a part of Gwangju’s cultural heritage in May 2000 (60 years after it was built), stands out in between skyscrapers. Three generations of his family lived there for 150 years.

Kim was born in 1927 and learned Chinese characters at a seodang - a village school. He then attended Hanam public elementary school and Songjeong public technical high school during the Japanese colonial era. 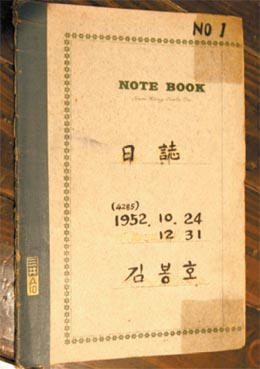 He was accepted to Chosun University, but had to drop out during the Korean War to carry on work at his family farm. It was Oct. 24, 1952 when he started writing in a diary, recording the weather, harvest yields and wages for farmers. More current diaries include stories about visitors and friends, his daily tasks, and other significant domestic and international political issues, including the presidential and general elections. Sometimes he wrote just two to three lines or used entire pages to fill in the details, but he never skipped a day.

“I am from an uneducated generation,” Kim said. “I often get the grammar wrong and can’t write fancy sentences. But I am still proud that I never missed a day wherever I was. I am proud because my diary shows I overcame many hardships in life.”

Out of many interesting stories he had in his detailed diary, there was a time when he actually benefited from diary writing.

“About 30 years ago, I sold inherited land at bargain to a neighbor who was living there in a hut,” Kim said. “But soon later, the tax office imposed several million won in transfer income tax. When I argued I did not benefit from the sale, the tax office asked me to provide reasonable evidence. I showed the related record of the sale in my diary, and it exempted me from paying that income tax.”

Kim hopes to keep a century of history in his diary. Meanwhile, he expressed some difficulties writing entries everyday.

“It’s getting more difficult to write as I get older. I’m beginning to understand why President Roh Moo-hyun said ‘I can’t read or write,’” Kim said. “My hand has a hard time keeping up with my mind. If I knew writing a diary everyday is this difficult, I wouldn’t have started. I told my grandson to make my diaries public on the 100th anniversary [of the first entry]. The records on three generation of life will be meaningful in the future.”

He also reminds us not to forget the fire on Sungnyemun, also known as Namdaemun, because if the nation’s cultural heritages are mismanaged, the original spirit and culture of the country can disappear easily. That’s why he not only writes a diary entry everyday, but also collects pictures, magazines and books, despite family’s opposition.