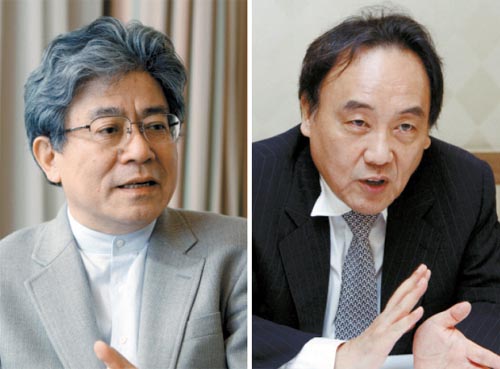 
Scholars from Korea and Japan plan to issue a joint report on how relations between the two neighbors will look in the future, with calls for a summit to declare a “new era” in their ties based on that vision.

Korea and Japan launched the research project in February last year under a 2008 summit agreement. Scholars from the two sides are expected to present a joint report on their study to their government officials early next month.

The scholars, led by Ha Young-sun of Seoul National University and Masao Okonogi of Keio University, held a meeting in Tokyo on Tuesday to Thursday last week and tried to reach final agreement on the envisioned report.

The 30-page report will be sent to the governments of the two countries.

“The idea among the scholars is that it would be good if the leaders of the two countries hold a summit late this month and issue a joint declaration based on this report,” one of the scholars involved in the project said on condition of anonymity.

In 1998, former Korean President Kim Dae-jung and Japanese Prime Minister Keizo Obuchi declared a New Korea-Japan Partnership for the 21st Century. Despite the declaration, their ties have since often soured due to rows over Japan’s 1910-45 colonial rule.

The scholars from the two countries are trying to resolve the last remaining differences over the illegitimacy of Japan’s forced annexation of Korea in 1910, sources said. Japan has maintained that the annexation was technically lawful, though Prime Minister Naoto Kan acknowledged its coerciveness in an apology statement earlier this month.

In the statement issued to mark the 100th anniversary of Japan’s colonization of the peninsula, Kan expressed “deep remorse” and his “heartfelt apology” for the colonial rule while offering to return centuries-old royal Korean books the country seized during the era.

The wording of the apology was largely similar to statements Japan has made since 1995 when former Prime Minister Tomiichi Murayama issued what was considered the clearest apology up to that point. This week’s statement, however, was seen as a step forward as it included Tokyo’s first acknowledgement of the forceful nature of the colonization.

Critics have rejected the apology, saying that Japan failed to admit to the illegitimacy of its forced annexation and to address other issues, such as compensating individual victims of forced labor and sexual slavery.