Carter gets North to free Gomes from jail

Carter gets North to free Gomes from jail 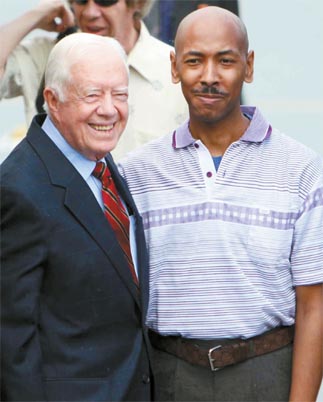 Former U.S. President Jimmy Carter, left, and Aijalon Gomes prepare to leave North Korea from Pyongyang yesterday. Looking gaunt but relieved, Gomes was freed after nearly seven months in jail in the North for entering the country illegally for purposes that are still unclear. [AP/YONHAP]

Former U.S. President Jimmy Carter flew out of North Korea yesterday after securing the release of an American citizen and a pledge from Pyongyang that it wants to resume nuclear disarmament talks.

The Nobel Peace Prize laureate left the reclusive communist state with Aijalon Mahli Gomes, who was jailed for illegally crossing into the North from China in January.

A Carter Center statement said: “At the request of President Carter, and for humanitarian purposes, Mr. Gomes was granted amnesty” by North Korean leader Kim Jong-il.

Gomes, 31, was first detained in January and sentenced in April to eight years of hard labor and a fine of about $600,000 for illegal entry into North Korea.

The U.S. Department of State said it welcomed his release, while stressing that Washington played no official role in Carter’s mercy mission.

Television images showed Carter escorting Gomes, who was dressed in casual pants and a polo shirt, up the steps of a private jet with a party of North Korean officials on the tarmac.

The Carter Center said it expected Gomes to return to Boston Friday afternoon to be reunited with his family.

“The measure taken by the DPRK [North Korea] to set free the illegal entrant is a manifestation of its humanitarianism and peace-loving policy,” the official Korean Central News Agency (KCNA) said.

The KCNA also said Pyongyang had expressed its willingness through Carter to resume six-party nuclear disarmament talks, which have been on ice since April last year.

North Korea has made similar declarations before but attached conditions to any resumption of talks that have been ruled out by the U.S. and South Korean governments.

But the latest offer came just after a senior Chinese envoy on the nuclear dossier had visited Pyongyang, and as Kim Jong-il is reportedly paying a visit to China, North Korea’s diplomatic and economic patron.

North Korea’s number two leader Kim Yong-nam, who met Carter Wednesday, expressed a willingness for “the resumption of the six-party talks” and the denuclearization of the peninsula, the KCNA said. It said Carter and his party had an “open-hearted” discussion with top North Korean officials on relations between the two countries, the nuclear issue and other “issues of mutual concern.”

North Korea walked out of the April 2009 nuclear talks and then carried out its second nuclear test the following month, sparking tougher United Nations sanctions.

A key obstacle to restarting disarmament talks is the sinking of a South Korean warship in March that resulted in the deaths of 46 sailors, an attack both South Korea and the U.S. blame on North Korea.

Carter, 86, made a landmark visit to Pyongyang in 1994 when the U.S. came close to war with North Korea over its nuclear programs. He helped defuse the crisis through talks with then-leader Kim Il Sung.

The U.S. issued a travel warning less than two hours after news of Gomes’ release broke, urging its citizens to avoid entering the North without “explicit official permission.”