Food aid delivered to the North

Food aid delivered to the North 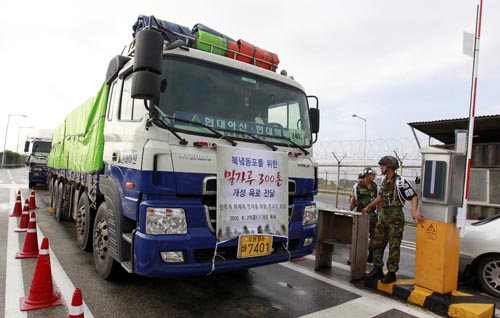 
A joint delegation of five major religious organizations in South Korea traveled to North Korea yesterday to deliver food aid, the second civilian visit to the communist state since Seoul imposed a travel ban in May.

The nine-member delegation of Catholic, Protestant, Cheondo, Buddhist and Won-Buddhist orders drove to the North from the western border town of Paju, Gyeonggi Province, accompanied by about a dozen trucks carrying 300 tons of flour.

The 250 million won ($209,170) worth of aid was the second inter-Korean assistance since Seoul imposed a North Korea travel ban in May in protest of the sinking of a South Korean warship two months earlier. North Korea denied involvement in the sinking that killed 46 sailors.

Seoul allowed the first civilian visit on Aug. 17, in which an aid organization delivered 400 million won worth of anti-malaria aid to North Korea.

“The denuclearization of the Korean Peninsula is important, but the lives of the people on the Korean Peninsula take priority over any other issue,” the group said in a joint statement at a ceremony attended by some 150 people, ahead of its departure. “We religious communities from the left and the right are taking a step toward opening the door for reconciliation and peace in the inter-Korean relations.”

During its one-day visit, the delegation will deliver the flour to Kaesong, just north of the inter-Korean border, and the aid will be distributed to inhabitants in the North Korea-China border county of North Hwanghae.