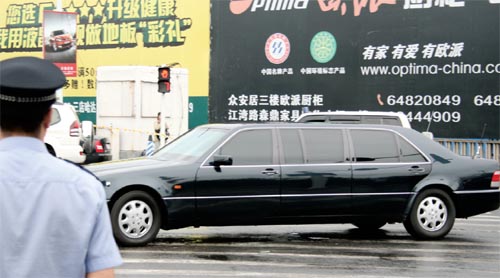 A limousine believed to be carrying North Korean leader Kim Jong-il leaves Jilin, China, yesterday, as part of a convoy of about 20 cars. Kim crossed the northeastern border with China aboard a special train Thursday. [YONHAP]


North Korean leader Kim Jong-il arrived in Changchun, the capital city of China’s Jilin Province, yesterday, after wrapping up the first day of his sudden trip to China in what Seoul officials termed a pilgrimage to get Beijing’s approval to bequeath power to his youngest son.

Some speculated that the seemingly open-ended trip may allow Kim to meet Chinese leader Hu Jintao either in Changchun or Beijing. Changchun is a favorite vacation venue for Chinese leaders.

Kim’s son, Jong-un, may be on the trip, raising the possibility of a first-ever meeting between Hu and the heir-apparent of the reclusive regime.

Sources said Kim’s entourage, comprised of around 20 limousines and five to six minibuses, left Wusong Hotel in the city of Jilin around 10 a.m. Korean time yesterday. Kim stayed the previous night at the hotel after crossing the border from Manpo in Chagang Province to Jian on his private train early that morning.

From Jilin, sources said, Kim headed west for about 90 minutes to get to a hotel in Changchun. North Korean or Chinese media were not present.

In Jilin on Thursday, Kim was seen visiting Yuwen Middle School, which his father, North Korea founder Kim Il Sung, attended from 1927-1930. Kim’s family fled to Jilin from the Korean Peninsula, which was colonized by Japan. 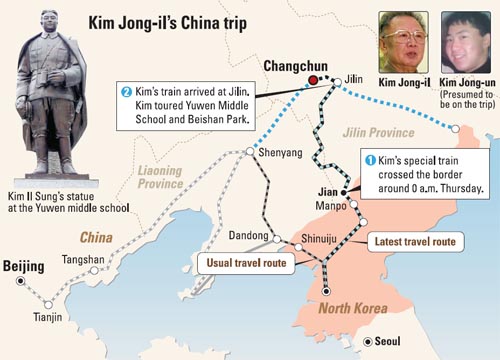 The two Koreas separated after World War II and the ending of Japan’s colonial rule, with the U.S. military occupying the South and the Soviet military occupying the North. Kim Il Sung founded North Korea in 1948. His communist North invaded the South in June 1950, starting the three-year Korean War, which ended in a cease fire, not a permanent peace treaty.

In Jilin, Kim Jong-Il also visited several places that the North commemorates as anti-Japanese shrines, including Beishan Park, where remains of independence fighters are buried.

Some analysts said the itinerary was a bid to secure legitimacy for Jong-un’s succession by emphasizing his political ancestry. Others speculated that Jong-un may have asked his father to show him the sites as preparation for becoming leader.

The North is scheduled to host a delegates’ conference of the Workers’ Party, the first in 44 years, to name top government officials early next month. The conference, expected by some to be held Sept. 6-8, could officially name Jong-un as heir to the throne. Kim Jong-il, 68, has suffered a stroke and is reportedly suffering from worsening health problems.

“What is most urgent for the North is a power succession,” a high-ranking Blue House official told reporters, explaining the reason for Kim’s visit to China. “It’s like South Korean leaders visiting the Seoul National Cemetery or the Hyeonchungsa Shrine before they make a grave decision in state affairs.”

An Chan-il, head of the Seoul-based World Institute for North Korean Studies, said the trip will serve that purpose to the fullest if Hu meets Kim Jong-il. A blessing from the Chinese leadership is necessary for Kim Jong-un to keep the military from threatening his hold on power, An said. Kim Jong-un is known to be 27 or 28.

Some analysts view the trip as an urgent plea for economic aid, with which Kim Jong-il could placate the North Korean public and bolster his legitimacy at next month’s meeting. Chronic food shortages in the tightly controlled economy were worsened by a botched currency revaluation in November 2009. Flooding has likely worsened the situation in the North.

Other analysts said Kim may be hoping to discuss with China the increasing international pressure on the North, including new economic sanctions expected to be announced soon by the U.S. The U.S. is trying to hold the North responsible for the deadly sinking of the South Korean warship Cheonan in March and its refusal to halt its nuclear weapons program.

Meanwhile, the Korean Central News Agency reported yesterday Kim Jong-il was approved on Wednesday as a representative of the Korean People’s Army to attend the delegates’ meeting to be held early next month.