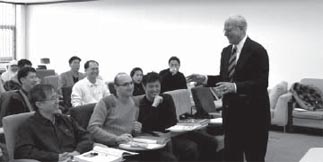 A foreign professor, right, gives a lecture to students at Sejong University. Some say that Korean universities are simply hiring English-speaking foreigners to improve their rankings without giving thought to improving education standards for students. [JoongAng Ilbo]

There’s no question that education was instrumental in Korea’s phenomenal growth over the last 60 years.

Through rote learning, students were once well prepared for working in factories where following orders was paramount. Now, high technology companies need highly skilled, creative, dynamic workers who have the initiative to produce results - not just follow orders.

But it’s a need that’s been ignored by both Korean universities and society.

It’s reality here that college graduates are not trained to hit the ground running on “day 1” of their post-graduate lives. Instead, they often have to be retrained for two to three years by the first company that hires them, resulting in a great waste of productivity and a big economic burden.

As a professor at two universities in Seoul for the past five and a half years, I’ve noticed that Korean universities in recent times - instead of focusing on improving their education quality - have been hurriedly employing foreign professors to improve their ranking so they can appear to be global players.

While this may result in a better ranking, it is detrimental to students and limits severely the career tracks of foreign professors.

Today, once a foreign professor is employed, he or she simply teaches a standard quota of classes - the same as Korean professors do. But many obstacles prevent effective teaching and learning.

First, students’ English language ability is insufficient. Second, the technical content is difficult (particularly in science and engineering). Third, the student doesn’t want to or can’t communicate with the professor during question-and-answer sessions. Fourth, the traditionally minded university student believes he should get high scores while simultaneously believing he’s on a four-year holiday after working hard to enter university. Fifth, the student focuses on memorization rather than understanding the material and applying new knowledge to real problems. And finally, the student expects the professor to feed him all that he needs to pass the exam comfortably.

It is also incredible that students are never held accountable for poor performance, while at the same time they are allowed to make judgments on professors. These class evaluation can significantly affect the contract renewal of foreign professors. In addition, Korean students’ evaluations are taken seriously even though they’ve never developed effective study skills. As a result, students have little motivation to adopt effective learning strategies for the benefit of their future careers, creating a “mission impossible” situation for foreign professors who are trying to teach their students effectively.

But students aren’t the only ones who are harmed by Korean universities’ failure to improve academic quality.

I know some foreign professors who have been contracted to teach and conduct research (in science and engineering), but their university will neither provide research students nor assist them in securing research funding since it can cost over $100,000 to set up a new science or engineering lab.

Whenever these foreign professors receive e-mails from their departments about possible funding sources, they’re written in Korean. And government Web sites that advertise research funding don’t provide the information in English in a timely manner. By the time foreign professors realize they can apply for funding, it is often too late.

This situation simply does not exist in globalized universities where equal opportunities policies exist to support the infrastructure and administrative needs of every professor - both foreign and local.

One hindrance to equal opportunities in Korea is the administration, which is operated exclusively on a top-down leadership and communication structure. As a result, foreign professors can neither train postgraduate students nor maintain their research careers effectively. In other words, they are not on an equal footing with Korean professors.

Korean universities also derail the careers of foreign scholars by making it difficult for them to advance in their field. Foreign professors who apply for a post at a better Korean university will most likely be rejected because they couldn’t produce sufficient research papers in international journals. Why? The Korean evaluation system for professors is based on metrics that are too narrowly focused. It’s an evaluation system that is out of step with the rest of the world.

Good foreign professors will only remain in Korea when their working conditions are not just adequate but rewarding. This can only be achieved with a transparent human resource management system and the opportunity for tenure track employment.

It’s critical to consider what adjustments must be made to systems and infrastructure in Korean universities to support the teaching and research activities of foreign professors, particularly in the science and engineering fields where large research funding is required.

Foreign professors who were trained in environments where two-way communications - between professor and student - is important have the greatest potential to increase the critical reasoning skills needed in Korean science and engineering students.

Under appropriate conditions, employing more foreign professors can lead to increased revenue for universities through increased numbers of foreign students, the provision of a better class of graduate to local companies, a more dynamic Korean economy, and, due to increased standards in teaching and learning, Korean Nobel Prize winners - a goal that has so far eluded Korean academia.

The potential benefits foreign professors can bring to Korea can only be realized through holistic planning from elementary to tertiary education.