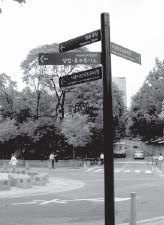 Foreign students in Seoul inevitably face some difficulties and inconveniences as they navigate their way through the enormous city. As a Seoul resident for the past five years, I, too, have gone through my fair share of trials and tribulations.

It’s no surprise that the first and biggest problem is the language barrier. Most people here don’t seem to speak good English, and it appears to be a large obstacle for foreign students who have just arrived without any background in Korean language.

Communicating with people here can pose a problem at times, especially in stores where clerks have limited or no English skills. This is particularly true for most of the “mom and pop” stores that are on every corner of every residential neighborhood.

Still, despite the language barrier, by gesturing, pantomiming, and sometimes even drawing, foreigners are usually able to get their message across. But while people always manage to find a way to communicate at the end of the day, it would be great if organizations like the Seoul Global Center could provide mentors for foreign students who have just arrived in Seoul.

Finding your way around the city can also be a huge challenge. Except for major roads, most streets do not have street signs. The streets, especially in residential areas, are not in neat grids and can turn and curve any which way. In addition, these roads are usually quite narrow - many times with just one lane of traffic.

The cities are divided into large administrative districts called gu, which are further subdivided into various dong. Even more vexing for foreign students are the buildings within a dong. The buildings may or may not be numbered, and if they are, one can only hope it’s done logically.

It would be helpful if all streets and roads were labeled with appropriate and uniform signboards so that everyone - especially foreigners - can recognize them easily. After all, I’ve heard that finding streets is not only hard for foreigners, but for Koreans as well. In Malaysia, for example, every road and street is clearly labeled on official, uniform signboards at every intersection

Perhaps surprisingly, foreigners also experience headaches with the Internet in the most-wired country on the planet. Many Web sites, for instance, limit membership for foreigners.

Since July 2004, Korean immigration officials have posted information online to allow foreigners to verify their identity. But foreigners are left confused because every Web site maintains its own procedures and security standards. Naver and Empas allow online identity verification by registered foreigners. But CGV and Cyworld require a faxed copy of your alien registration card. On Naver, it’s also difficult to follow its registration procedures.

In fact, I sometimes have to register in cafes to access Naver or Daum, which I use to keep up with announcements and current events held by student organizations at school. But because of this inconvenience, I have had to miss some of them or only find out about them after they’re over.