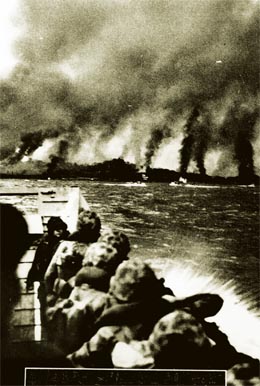 Gen. Douglas MacArthur’s Incheon landing on Sept. 15, 1950, was effective in cutting off the enemy supply line. U.S. Marines on a landing ship approach the shores of Incheon shelled by naval guns. [JoongAng Ilbo]

Last week, General Paik met with some of his comrades and reflected on the Battle of Dabudong

The rumor that the American troops were planning an amphibious landing assault was spreading by the day. There was no mention of the location, Incheon, in any of the rumors, but people were becoming increasingly aware that a large scale landing would take place somewhere.

Meanwhile, Gen. Frank W. Milburn lived up to his promise to provide us with artillery support. Col. William Hennick, the head of the 1st Battalion, 10th Field Artillery came to the ROK 1st Division headquarters. 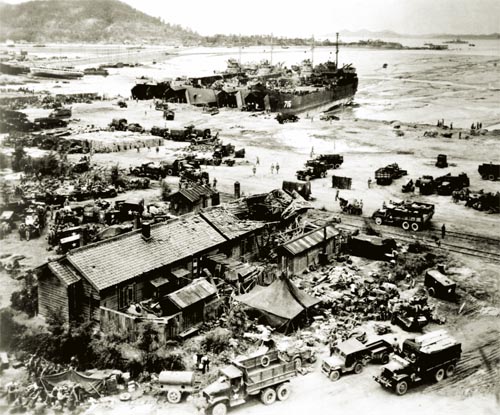 American troops prepare for a march to Seoul after successfully completing its Incheon landing. Provided by U.S. National Archives and Records Administration

“If you need artillery support, make your request without any reservations,” said Hennick. “I’ve brought with me 70 to 80 transport vehicles for artillery shells.”

Hennick would accompany the ROK 1st Division in our drive up north into Pyongyang and Unsan, North Pyongan.

With such firepower, we were equal to any American division. I was a lucky commander, considering that other ROK divisions did not receive anything close to the type of American support we received. It wasn’t mere artillery support, but the fact that a U.S. field artillery battalion was placed under my command. I also felt a lot of pressure. Such support came with a great deal of expectations for me and my men to rise up to the task at hand.

In return, I sent a company from the ROK 12th Regiment to help the U.S. artillery unit. Artillery units are responsible for providing fire support for those fighting on the front lines. However, they are not as well-trained when it comes to ambush or surprise attacks from the enemy. Artillery units can be ill-prepared for such attacks. They needed some support to take care of such problems. I discussed the matter with Col. Kim Jeom-gon of the 12th Regiment and made a decision to send some of his men as guards for our allies.

I was also curious as to what our enemy troops were planning next. They had failed to break through the Dabudong line, but they did make a push at Yeongcheon, North Gyeongsang. They also failed in their overall effort to advance farther south to Busan. Sadly for us, that was not the end. The enemy had another plan. They were looking to stop the allied forces’ counteroffensive efforts and were focused on keeping the allied forces firmly placed near the Nakdong River. NKPA (North Korean People’s Army) Front Commander Kim Chaek was stationed in Gimcheon, North Gyeongsang, but a large number of troops were placed near the Nakdong line in preparation for the allied forces’ counteroffensive efforts.

The Nakdong River area was the site where it all started for me. It was the place where I rushed to on the morning of June 25, 1950. At the time, we were continually pushed back through numerous battles. We had lost a countless number of men along the Dabudong line. It was difficult at the time to even imagine a victory. We had been pushed back from the Imjin River and put all our manpower and effort into defending the line. We were consumed with the task of defending our post, and attacking our enemy did not even enter our minds at the time.

I was not alone in thinking these thoughts. Other commanders began to grow confident about the chances of successfully fending off enemy troops and making a push for a win.

It was at around this time we got an order from General Milburn at 9 a.m. on Sept. 16, 1950: “I want the ROK 1st Division to advance to Mount Palgong and defeat the enemy’s 1st Division. Then rendezvous with the U.S. 1st Cavalry Division, cross Nakdong River and attack Sangju [in North Gyeongsang].”

Having spent the entire war defending and holding off enemy troops, we were finally set to leave Dabudong and embark on our first attack.

When we arrived at Mount Palgong, we encountered a steady rainfall. There was no end in sight to the late summer rain, and it didn’t make it any easier for us to do our task. The air support that was planned was called off because of the rain. To make matters worse, the enemy troops were resilient in their efforts to defend the area.

We faced other problems as well. We lost communication and all contact with the 15th Regiment, which was in charge of the area to the left of us. It left us clueless as to the whereabouts of the 15th Regiment for two days.

The 12th Regiment, which was the strongest of the ROK 1st Division, was also having trouble finding their way through the enemy line. Things were not any better for the 11th Regiment, which also had its hands full with the counteroffensive of the enemy troops at Mount Gasan, approximately 10 kilometers (6.2 miles) west of Mount Palgong.

It was around Sept. 15 when we began to hear rumors that additional U.S. troops had already landed in Incheon. If we did not advance up north and provide support for the incoming troops, it would make it difficult for the allied forces to fully succeed in the Incheon landing operation. A botched landing operation would be detrimental to the overall outcome of the war.

Things were not going as smoothly as we had planned. We were not alone in facing delays in our efforts to advance out of the southeastern area of the Korean Peninsula. The U.S. 8th Army was getting a lot of pressure from General MacArthur in Tokyo, Japan.

With a large majority of the enemy troops located near the Nakdong line, the main objective of the operation was to cut off its supply line. Although there was a sizeable number of enemy troops in Seoul, Incheon and Pyongyang among other locales, the heart of the enemy force was concentrated near the Nakdong line. The Incheon landing was a risky and bold move, but it had its benefits in that it would catch the enemy off guard and allow the allied forces to avoid a brutal winter campaign. It also made sense in that Incheon was located near Seoul.

During a war, it is imperative for troops to receive a steady flow of supplies - food, ammunition and other necessities - in order to effectively carry out plans. The enemy’s supply line stretched from the southeastern area of the peninsula to north of what is now the 38th parallel dividing line between North and South Korea.

The first phase of the Incheon landing operation had been a success. With powerful allied forces landing in Incheon, the supply line had been cut off. The success of the operation added to General MacArthur’s reputation as a commander.

The enemy was expecting a landing in Gunsan, North Jeolla, and the incoming allied troops outnumbered the enemy’s six-to-one. A total of 200 enemy fighters were killed and 136 were captured at the Incheon landing.

But there were still problems. The allied forces that had landed in Incheon were now headed for Seoul. It was now imperative that the U.S. and ROK forces near the Nakdong line provide support for the troops headed towards the capital city so that enemy troops would not fall back to attack the troops on the move.

The U.S. 9th Corps’ 2nd Division and 25th Division were responsible for advancing through the Honam, also known as the North and South Jeolla region. The ROK Infantry 2nd Corps’ 6th and 8th Divisions were to advance to Hwacheon County, Gangwon, via Wonju. ROK Infantry 1st Corps’ 3rd Division was to advance through the long East Sea shores with the Capital Division to the left. The U.S. 1st Corps had the most important task of advancing through the Gyeongbu axial line. The ROK 1st Division was part of the same effort. The success of the U.S. 1st Corps was imperative in that if it advanced to the north as planned, it could result in a very successful Incheon landing. On the other hand, if the U.S. 1st Corps failed to achieve its mission, the enemy troops could attack the allied forces from the south, rendering the operation a failure.

If the U.S. 1st Corps failed, it would result in the waste of General MacArthur’s brash and risky initiative. It was precisely the reason why General MacArthur was putting a lot of pressure on Lt. Gen. Walton Walker of the U.S. 8th Army and Gen, Frank Milburn of U.S. 1st Army to succeed with their respective tasks in the mission.