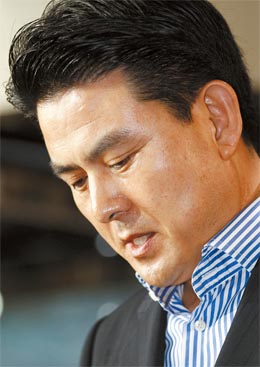 At a press conference yesterday morning, Kim Tae-ho gives up the nomination to become prime minister because of his “indiscretion.”[YONHAP]

Kim, former South Gyeongsang governor, was nominated by President Lee Myung-bak on Aug. 8, and yesterday became the third prime minister-designate to fail to get through the confirmation process.

“I feel very sorry to the people for causing troubles and concern with my problems,” a grave-looking Kim said in a press conference yesterday. “Today I’m giving up my nomination. I figured I should cause no more trouble to President Lee’s state affairs management.”

Although Kim said he felt victimized in some ways, he said he believed his political woes stemmed from “lack of discretion.” 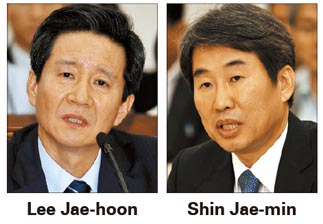 “The most important virtue of a human being is trust,” Kim said. “What can I possibly do without the people’s trust even if I were appointed prime minister?”

Two more nominees for Lee’s cabinet, Culture Minister-designate Shin Jae-min and Knowledge Economy Minister-designate Lee Jae-hoon, also threw in the towel after rough confirmation hearings. But unlike the prime minister’s post, their appointments didn’t need to be confirmed by the National Assembly.

“When Lee was briefed about Kim’s and others’ decisions, the president said he feels regretful about the situation because they are experienced, able officials,” Presidential Chief of Staff Yim Tae-hee said. “In his Aug. 15 Liberation Day speech, President Lee envisioned a fair society in the administration of state affairs and he decided to accept the nomination withdrawals as he figured their decisions reflected the people’s will.”

Yim continued, “Turning over a new leaf, the government will step up its effort to stick to the principle of a fair society in the public servant community and all other fields: politics, economy, society and culture.”

While three nominees have stepped down, speculation is high that Lee will stick by his choice for national police chief. Cho Hyun-oh caused an uproar over his controversial remarks about the late former President Roh Moo-hyun and the families of the sailors who died on the Cheonan, but Cho has not withdrawn his bid.

Cho has issued apologies, and a senior Blue House official said his appointment will be pushed forward.

The three nominees who gave up their posts were barraged with charges that they violated the law.

Kim was grilled by opposition lawmakers on allegations that he received a multimillion-dollar bribe from Busan-based businessman Park Yeon-cha in 2006. Although Kim was cleared of those charges last year, the media released a photo of Kim and Park standing together at a book launch in February 2006. Kim had publicly stated that he only got to know Park in 2007.

Lee Jae-hoon’s wife was accused of having purchased a house in one of Seoul’s poorest neighborhoods based on insider information about the city’s urban redevelopment plan.

While some political observers were concerned that the failure of the three nominations would have a negative impact on the Lee administration, they said a more important problem is finding people to replace them.

The Blue House yesterday began reviewing new potential candidates. “The appointment of a new prime minister will happen soon,” a senior-ranking Blue House official said, hinting that the selection will be made by mid-September.

The ruling Grand National Party said the three candidates made “a difficult decision not to burden President Lee’s state management” and that it humbly accepted the people’s will.

“Through this incident, we’re hoping that tougher appointment verification measures will be mapped out,” GNP Spokesman Ahn Hyoung-Hwan said in a statement.

Opposition politicians crowed victory. “President Lee must apologize as his latest reshuffle revealed the incompetence of the Blue House’s personnel appointment system,” said a statement from the Democratic Labor Party.