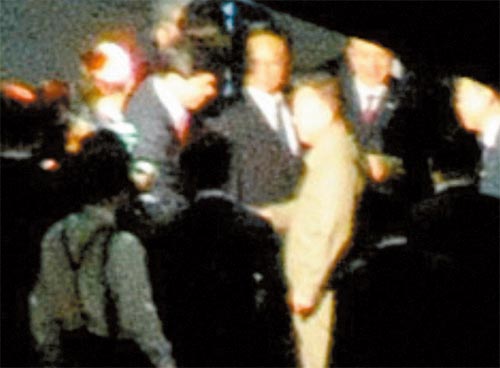 In his sudden, ultrasecretive visit to China, Kim is believed to be seeking the blessing of China’s leadership for a transfer of power to his youngest son, Kim Jong-un.

The son is believed to be on the same trip.

A source in Harbin told the JoongAng Ilbo that Kim had arrived aboard his special train.

“Kim is staying at Harbin city’s special guest house in the Sun Island Park,” the source said. “His third son Jong-un, who was named the heir, came with Kim.”

The source said he cannot confirm whether Hu accompanied the Kims.

Another source said Kim’s trip to the area appeared to be linked with North Korea’s food shortage.

“Most of the rice aid from China comes from Heilongjiang Province,” said the source.

“Kim probably made a rare trip to the area to solve his food problems,” the source said.

The source said Ji Bingxuan, secretary of the Communist Party of China’s Heilongjiang committee, the highest official in the province, and other senior provincial officials accompanied Kim on his tour of the region.

Sources said Kim’s private train was seen leaving Changchun at 9:15 p.m. Saturday, leading to speculation that he was wrapping up the visit that started early Thursday morning.

But the train Kim used on previous trips was not seen in border areas such as Jian in Jilin or Dandong in Liaoning. Sources said he was observed using another route to reach Harbin, northeast of Changchun.

Earlier in the morning yesterday, speculation had been high that Kim and his entourage were heading to Yanji, capital of the Yanbian Korean Autonomous Prefecture, but it was confirmed later in the evening that Kim arrived in Harbin.

Neither the governments nor the media in North Korea and China have yet to mention Kim’s visit, as has been the case during his five previous visits.

Kim met Hu on five previous visits to China, the last one being in May.

A source in Changchun said he talked with a person who witnessed Hu arrive at Changchun’s airport Friday, after which he headed to the Nanhu Hotel, where Kim was staying.

“The witness said the meeting [between Kim and Hu] and a banquet at the hotel ended around 10:40 p.m.,” the source said.

A second source at the Nanhu Hotel confirmed that Hu stayed there Friday.

A diplomatic source in Seoul also said Hu was believed to be in northeastern China on vacation Friday and stayed all day at the Nanhu Hotel.

Kim crossed the border from Manpo in the North’s Chagang Province to Jian, Jilin Province, on his private train on Thursday and spent the first night in Jilin. In Jilin on Thursday, Kim made a pilgrimage to Yuwen Middle School, which his father, North Korean founder Kim Il Sung, attended from 1927-1930.

Analysts considered this as a bid to stress his and Jong-un’s political ancestry before a power succession.

The North is scheduled to host a delegates’ conference of the Workers’ Party, the first in 44 years, and may name Jong-un as heir to the throne.

A high-ranking Seoul official said Kim was observed on Thursday visiting Baishan Park in Jilin along with a man in his 20s, which he presumed to be Kim Jong-un, and a middle-aged woman, presumed to be either Kim’s fourth and current wife Kim Ok or his younger sister Kim Kyong-hui.