Can it be makgeolli if made in Japan?

Can it be makgeolli if made in Japan? 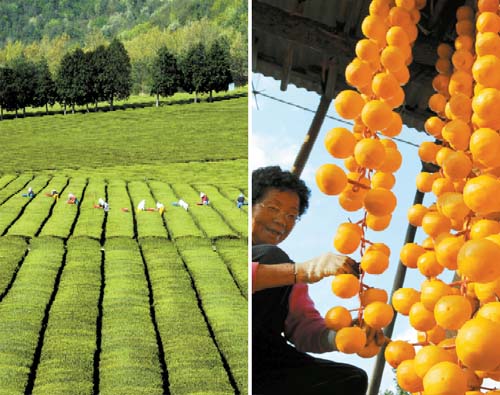 In November 2008, Pocheon makgeolli, the famed rice wine brewed in the mountainous region of northeastern Gyeonggi, became a registered trademark. No longer would just any company be allowed to use the name.

But the Korean makgeolli industry was in a state of panic: The name wasn’t registered in Korea, but in Tokyo - at the Japan Patent Office.

In an ironic twist, the very local companies who make authentic Pocheon makgeolli would no longer be allowed to call themselves by their own name if they wanted to continue exporting their local specialty to Japan. It hadn’t been just a simple matter of getting to the trademark office first. Unlike in Japan, it’s illegal in Korea to trademark a name of a place. The Japanese company that sneaked past Korea’s makgeolli makers was able to avoid the issue because “Pocheon” was treated as a noun by Japanese officials.

But the Korean companies were partially responsible for their predicament, too. Since 2005, Korea’s “Geographical Indication System” allows Korean businesses to trademark the name of a place if their product owes its certain qualities and characteristics to its geographic origin. The rice wine brewers of Gyeonggi - perhaps oblivious to the Geographical Indication System - had failed to register their makgeolli in time. 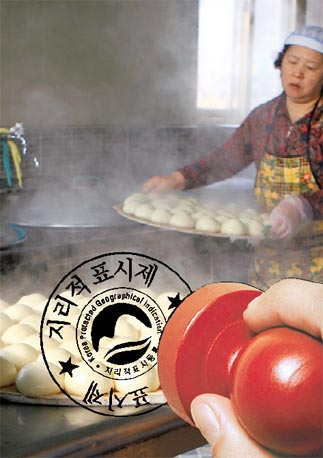 Anheung steamed bread made in Gangwon, right, are Korea’s representative products whose name values are protected by the Geographical Indication System.

Dangers of not trademarking

That the Geographical Indication System remains largely unfamiliar and unknown has become a growing problem for Korean businesses, especially for food manufacturers, at a time when Korean cuisine is becoming more popular overseas. And even among those who are aware of the geographical trademark regulations, the system has been largely ignored or unused because regional products haven’t been actively exported until recent years.

Sluggish implementation of the geographic trademark system among Korean companies has placed the country on the defensive in the global market. After tug-of-war negotiations last year over the Korea-EU free trade agreement, the EU included 162 geographical trademarks in the agreement, protecting the names of about 80 types of wine as well as Irish whiskey, cognac and Camembert cheese.

Now there’s fear that failure to take action could mean that the country loses a piece of its sovereignty - its cultural ownership over its unique agricultural products. The potential damages could be significant - if overseas industries register a Korean trademark first, passing their imitation products as genuinely Korean-made, Korea’s efforts to develop high quality crops and agricultural products may only be beneficial for other countries while damaging domestic industry.

Other countries have learned this lesson the hard way. In September 1997, an American agricultural products company, RiceTec, applied to trademark Basmati rice - the popular grain indigenous to Pakistan and northern India that’s known for its fragrance and deep, delicate taste. The application drew the ire of thousands Indians, who protested in April 2000 in front of the United States Patent and Trademark Office.

After diplomatic conflicts arose between the United States and India, RiceTec eventually agreed to cancel parts of the patent. Still, an American court ruled that “Basmati” fell under the category of a noun, now making it difficult to distinguish between “real” Basmati rice harvested in India and the “fake” Basmati rice produced by American companies.

Closer to home, an American supermarket company called Lee Brothers in 1998 trademarked “Sunchang glutinous rice gochujang,” a red pepper paste. The company’s application was approved after explaining that “Sunchang” was not a place but a word meaning “pure spear.”

Unaware of the now-trademarked name, Daesang, a Korean company that sold “Cheongjeongwon Sunchang gochujang” in America, was sued for trademark infringement. In 2003, Daesang filed a countersuit against Lee Brothers for unlawfully using “Sunchang.” After a two-year legal battle, an American court ruled in favor of Daesang. Despite the victory, Daesang was forced to spend $2 million in legal fees on something that could’ve been prevented had they registered with the Geographical Indication System.

As for Pocheon makgeolli makers, after finally trademarking its geographic name this past April, Pocheon rice wine brewers are preparing to sue to regain the right to call themselves as they are in Japan.

Korea’s laws a work in progress

Korea’s Geographical Indication System has been a work in progress since its adoption in January 1999, made against the backdrop of a global debate about ownership and sovereignty rights over agricultural products and processed goods.

While the first intellectual property rights agreement was brought about in Paris in 1883, it wasn’t until 1994 when the World Trade Organization negotiated the Trade-Related Aspects of Intellectual Property Rights (Trips). The international agreement declared that “countries should refuse to register or make invalid a trademark which has the potential to cause confusion over the origin of the product.”

When Korea adopted the standards by introducing the Geographical Indication System to manage the quality of agricultural products, the products that could be registered were limited to agricultural crops. Beginning in 2005, the law was expanded to protect businesses and products - not just limited to crops - to further prevent domestic companies from suffering damage. As a result, products such as Hansan ramie fabric and Chuncheon buckwheat noodles were able to register their names as trademarks, and those who used the appellations unlawfully could be penalized.

Of course, as with all systems, the Geographical Indication System has not been flawless.

A member of a regional farming association complained that current geographic trademark laws hadn’t been effective. “No profits were gained at all. People can’t even tell apart geographical indication marks and a place-of-origin indication mark,” said the member. “What’s more, fruits and vegetables are exported to Japan, so the trademark doesn’t even matter.”

When the Geographical Indication System was initially introduced in 1999, expectations were high among governmental and regional organizations and farmers. By registering their geographical names, they believed their products would see higher prices and increased sales.

More than 100 regional products were registered with origin indication marks. But aside from Boseong green tea and Haman watermelons, which were sought after more by customers, few other products saw success.

Other countries have also seen unintended consequences after implementing origin trademark systems. In France, after Appellation d’origine controlee (AOC) was approved to safeguard the country’s products, land prices in the specified regions shot up to 150 times the original prices.

But as an increasing number of foreigners express interest in Korean food, and as more Korean restaurants open around the world, it may be high time for Korea to take proactive steps to safeguard its cherished products. The tombstone on English playwright George Bernard Shaw’s grave reads, “I knew if I waited around long enough something like this would happen.” A plan for a well-functioning geographical trademark system should be implemented before worse problems arise.