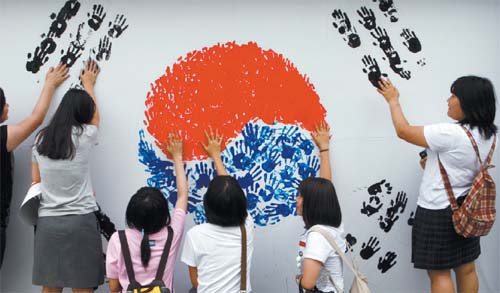 But despite the spectacles behind commemorating these watershed events, Korean history is becoming less important for Korean students to the growing alarm of the public.

“Since none of the materials covered in Korean history class can be applied to my college admission, I do not see the necessity of learning it.” said Park, a high school senior at Ewha Girls’ Foreign Language High School who wished to remain anonymous.

It’s a widespread attitude among many Korean students, creating worry that a generation of Koreans will grow up ignorant of their own history.

A television news program, “News Who,” recently tested highly ranked high school students on Korean history. Consisting of 10 middle school-level questions, the average test score was just 5.9 out of 10. When the show’s producers visited a high school in Seoul, they found only three out of a total 360 students were enrolled in a Korean history class.

“I fully respect students’ decisions to not take Korean history,” Kim said. “Frankly, there are too many parts to study in Korean history. There can be as much as twice the material of other subjects.”

A survey conducted in February by the Korea Federation of Teachers Association found that 40.9 percent of students did not know the exact meaning of the March 1 Independence Movement. The survey was conducted among 3,919 elementary, middle and high school students across the nation.

Youth apathy toward Korean history was also made evident in March 2009, when a group of inebriated high school students in South Gyeongsang defiled Goindol, stone dolmens designated as national historical artifacts. They were apparently unaware of their historical significance.

Now many teachers are worried that a new curriculum set by the Ministry of Education that makes Korean history optional will make the situation even worse.

“It would worsen the level of knowledge among students in fields of national history,” Kim said.

Even teachers of different subjects are up in arms over the new curriculum’s history policy.

“Korean history, per se, is the root and the identity of Koreans,” said Lee, an English teacher at a private institution in the Gangnam district of Seoul. “Appreciating the cultural identity of Korea, especially in a globalized arena, is nonetheless the top priority.”

A straw poll taken by the reporters at Gangnam Station and Hongeun-dong, Seodaemun District, seems to bolster concerns that historical ignorance among teenagers is high. Only 46 percent of the polled students knew the importance of Korean Independence Day, which falls on Aug. 15. Just 30 percent knew about the May 18 Gwangju Democratization Movement. Furthermore, 54 percent knew about Yu Gwan-sun, who fought for Korea’s independence under Japanese colonial rule. And a mere 28 percent of students knew about Yoon Bong-gil, the Korean independence activist.

As these incidents and revelations arise, more Koreans have started to speak out about the trend.

“Knowing where you come from is more important than ever in this globalized setting,” said Park Gittae, founder and leader of Voluntary Agency Network of Korea (VANK). “To know about your country’s culture and heritage is imperative to knowing where you stand in the present - your true identity.”

This article was written with assistance of staff reporter Sung So-young.