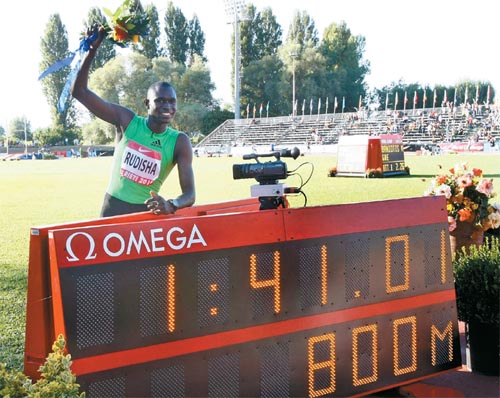 David Rudisha of Kenya poses after setting a world record in the 800 meters in Italy on Sunday. [AP/YONHAP]


RIETI, Italy _ Kenya’s David Rudisha set a world record in the 800 meters for the second time in a week and Jamaica’s Nesta Carter ran 9.78 seconds in the 100 meters at the Rieti Grand Prix on Sunday, tying American Tyson Gay for the fastest time this year.

``I came here with the plan of setting a world record, even though I felt tired after the Diamond League races,’’ Rudisha said. ``My plan now is to run under 1:41 and I think I can do it.’’

Helped by a tailwind of +0.9, Carter used a strong finishing kick to lead an extremely fast field, with seven of the eight entrants clocking 10 seconds flat or under. Ryan Bailey of the United States was the runner-up in a personal best 9.88, Mario Forsythe of Jamaica finished third in a personal best 9.95 and Christophe Lemaitre of France crossed fourth in a national record 9.97.

Oliver, who has run under 13 seconds five times this season, knocked over two hurdles midway through.

Rudisha was helped by his friend and pacemaker Sammy Tangui, who set a blistering speed for the first 400 meters.

Rudisha then sprinted away from the field in the last few hundred meters, crossing 20 meters ahead of his nearest competitor, fellow Kenyan Boaz Kiplagat Lalang, who timed 1:42.95. Until a week ago, Wilson Kipketer of Denmark had held the record of 1:41.11 for 13 years.

A 21-year-old former world junior champion, Rudisha had promised to return to Rieti after bursting onto the senior scene with a then-African record of 1:42.01 last year at this meet in central Italy.

``Next year I want to come back and set another world record,’’ Rudisha said.

It is the eighth world record set at the Raul Guidobaldi Stadium, following Asafa Powell’s then 100-meter mark of 9.74 established three years ago.

With Powell and current world record-holder Usain Bolt (9.58) both out with injuries, Carter and Gay now share the 2010 lead in the athletics’ signature race. Gay ran 9.78 into a headwind on a wet track in London earlier this month.